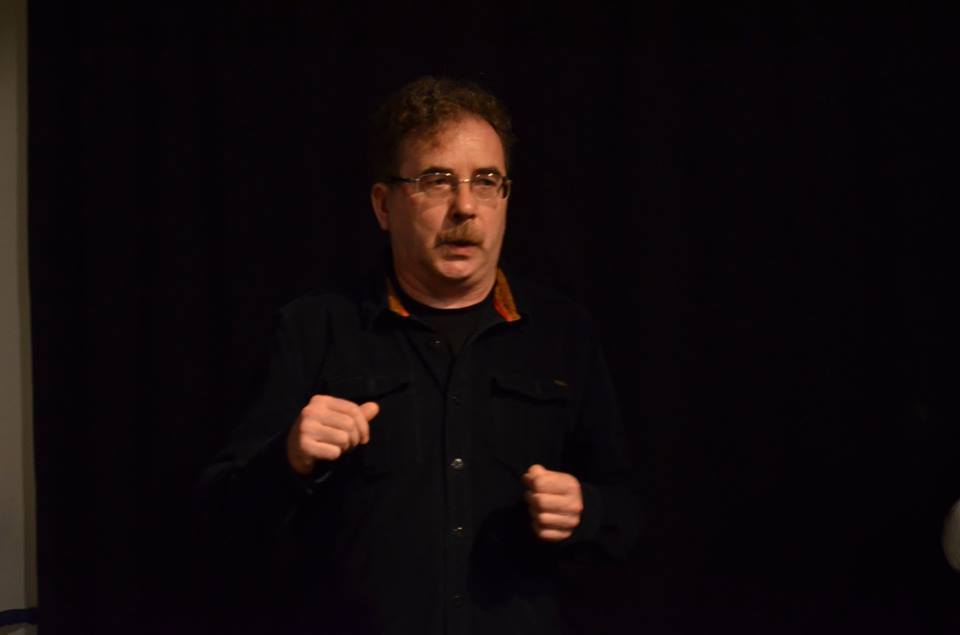 Volodymyr Chemerys is a leading human rights activist in Ukraine.  He was a member of the Verkhovna Rada (Parliamentand one of the leaders of the 1990 “Revolution on granite” and “Ukraine without Kuchma” campaign in 2000-2001. He a member of NGO Institute ‘Republic’, which advocates for freedom of assembly and other civil rights’   Published in full is an interview which was cited  the BBC Ukraine report we published earlier on the dangers of the new AZOV ‘National Militia’.  This first appears on Ukraine’s  Channel 24 .

Kanal 24, News, 31 January 2018. “What are the National Militia, why were they formed and what can we expect from them?

Presenter: What is this movement and can it be dangerous? We’ll talk about this with human rights activist Volodymyr Chemerys. He’s our guest here in the studio. We can see from the video clip that the militia men came up to people and they in principle were positively disposed towards them. What good can come of these National Militia or what can come out of ithem that’s not so good, what is concealed underneath this phenomenon?

Chemerys: Let’s start from the Ukrainian law, the constitution. These people don’t have the right to patrol the streets without the police. This took place without the police being present. This so called volunteer people’s militia don’t have the right to undertake certain procedures. They don’t have the right to examine, search, to detain you, all the more so they don’t have the right, as that man just said, to close a business that appears to them to be either legal or illegal. But it is already taking place in Ukraine, they are already active, and not just these national militia alone and not only those who yesterday attacked the Cherkassy city council, those who attack peaceful gatherings as happened on 19 January, those who attack mass media outlets, put pressure on the courts, those who beat up that British citizen because of his appearance, which they didn’t like. All this is already happening here and its happening with the co-operation of the police. That is to say the police are either passive or they facilitate it.

All this is illegal. These so-called national militias are registered as civic associations. There is nothing in the law on civic associations that permits such groups to uphold public order. That kind of activity appears only in the law on the participation of citizens in the protection of public order. For that kind of activity a completely different registration is required, one given by the national police. It requires reporting to the national police, and we do have such organisations registered for this purpose in Ukraine. In the regions, or example  in Volyn. They don’t have the right to do what these lads (khloptsi) are now doing. They have the right only in rural areas to submit protocols (reports) for smoking. I understand there can be such a situation of a surge in crime where it becomes clear that the police cannot manage to defend public order. This means that the police are not fulfilling the responsibilities placed on them by the law  and the constitution. Because only the police should defend public order. And the participation of citiziens in the maintenance of public order can only be supportive of the police, but without any right to act independently. Because if such rights are given there will be raids and seizures and closures of businesses, people will be beaten up, in fact that is already taking place, because they hold different views, or they wrote something in Facebook, because they look a certain way. They are going to start checking people’s documents, searching their bags, or as they themselves have said they are going to use force. They have no right to use force. There will be chaos if this starts happening.

Presenter: But given that the national police is not coping with the responsibilities placed on them won’t people put their faith in these national militia?

Chemerys: You know Erich Fromm, the philosopher once wrote this work called escape from Freedom. In conditions where there is a spate in crime, when the socio-economic situation is as you know it is, I don’t have to describe it, people look for some kind of protection. They look for a strong hand. And they are now being offered this strong hand. How it came to this in the 1930s in Germany is well known.  I’m not speaking here off the cuff. The connection between the national militia with the National Corps, a political party, and with Azov, one of the divisions of the (state) National Guard is plain to see everywhere.

The deputy commander of the National Guard said that these boys, well, they have their own view about National Socialism, in addition to the fact they utilise explicitly Nazi symbols, and human rights activists, both Ukrainian and international human rights organisations have identified a very dangerous tendency in Ukraine; the rise of ultra-right violence, which we plainly see. And rather than dealing with this problem our law enforcers are trying to legalise it.

Even though it is illegal there is co-operation going on, that is well kown In reality, the function of these people (the national militia) is to prevent any social and civic protest which threatens the rule of the oligarchs. That is what these lads are here to do, whether they are aware of it or not.

From 9.50. According to the constitution all citizens of Ukraine have the right to gather peacefully, without arms, and carry out their actions. But on 19 January in central Kyiv on Michael’s sSquare right next to a Kyiv police station a group of people gathered to take part in an anti-fascist action. They were surrounded by members of the ultra right C-14 organisation who attacked them. The police detained eight participants of the protest action and not those attacking them. So in fact they tried to put a stop to this action. The ultra right is working with the police, and this is understood by everyone now, and this has been stated by the United Nations human rights monitoring mission.

Last year Stas Serhiyenko, a student at Kyiv Mohyla Academy, was attacked by ultra rightists with knives. They stabbed him. There has been no investigation into this attack, although spokesmen of this ultra right organisation have declared openly on Facebook that they did it.

So in reality, with the help of such ultra right formations the leadership of the police are disrupting such protests. This is very useful for them because it wouldn’t do for a counsel to the ministry of internal affairs or a policeman to beat up people and to break up their meetings. Our western partners will say look here, what’s going on. But when this is done by Nazis and the police just closes their eyes to what’s going on, or don’t investigate these incidents, this is all very useful to the police themselves.

And another thing that is important: if the police can’t carry out the responsibilities that have been placed on them by the law with respect to the protection of public order and engage all sorts of other formations for this purpose then… And by the way, the law prohibits the involvement of any political or ideological  groups in the maintenance of public order. This is a direct violation of Ukrainian law. If the police are not fulfillingtheir responsibilities, then the question arises as to how they are using public funds, what we Ukrainians pay them for through our taxes. Its long overdue for the leadership of the police to resign for its failure to carry out its duty.

Presenter: We have on the line Ihor Vdovin,  rechnyk of the National Militia. We’ll ask him: whose money has gone into the creation of the National Militia? Whose money are these people working for, that is, to go out at night and patrol the streets, and during the day as well. People have families to feed, its hard to think all this is on a voluntary basis.

Vdovyn: Good evening Olesia, good evening Mr Cheremys. Look, right away you are manipulating people’s thinking by claiming that people are doing this for money. That’s not true.

Presenter; No, I’m not manipulating people’s thinking, I’m simply asking whether people are doing this for money?

Vdovyn: They are not doing it, for any kind of money. The supporters of Yanukovych’s Party of Regions and other titushky (rent-a-mob) went onto the Maidan for the money. We are not in this for the money. As for myself, I have my own income working as a journalist for several publications, and I devote my free time to activism, to supporting the National Militia. Similarly, my colleagues, they too are working and putting in their free time to maintain public order on the streets.

Presenter: What about your jackets, for whose money have….

Vdovyn: Each participant bought his own jacket with his own money. You can go into the Militarist if you want, it’s a fantastic store, the firm is called Milyek…

Presenter: Let’s do with without advertising. Tell us, please, if its not for money and you buy your own jackets why are you calling on people who have the fight to use firearms to join the National Militia?

Vdovyn: Because those people who know how to use firearms are the people in Ukraine who understand we have a criminalised situation and Ukraine is quite unstable. That’s why.

Presenter: Thank you…..Volodymyr , I’ll ask you to respond to what we’ve just heard.

Cheremys: All the structures associated with the National Corps have their own training camps, and they talk about it openly. They even have children’s camps. All of them are provided by the Ministry of Internal Affairs. The question immediately arises: this is not financially supported as such, it is (Cheremys emphasises) “administratively facilitated”. Truly, given the considerable cost involved no-one could carry off such a march through Kyiv (as the on on 28 January)  without the support of the national police. That march shocked not just Ukrainians, but Europeans like the Germans and Austrians who recalled such scenes from their own history. Truly, this is a test for Ukraine as to how much Ukrainians are still immunised against fascism. We’ll see how we get through this test.