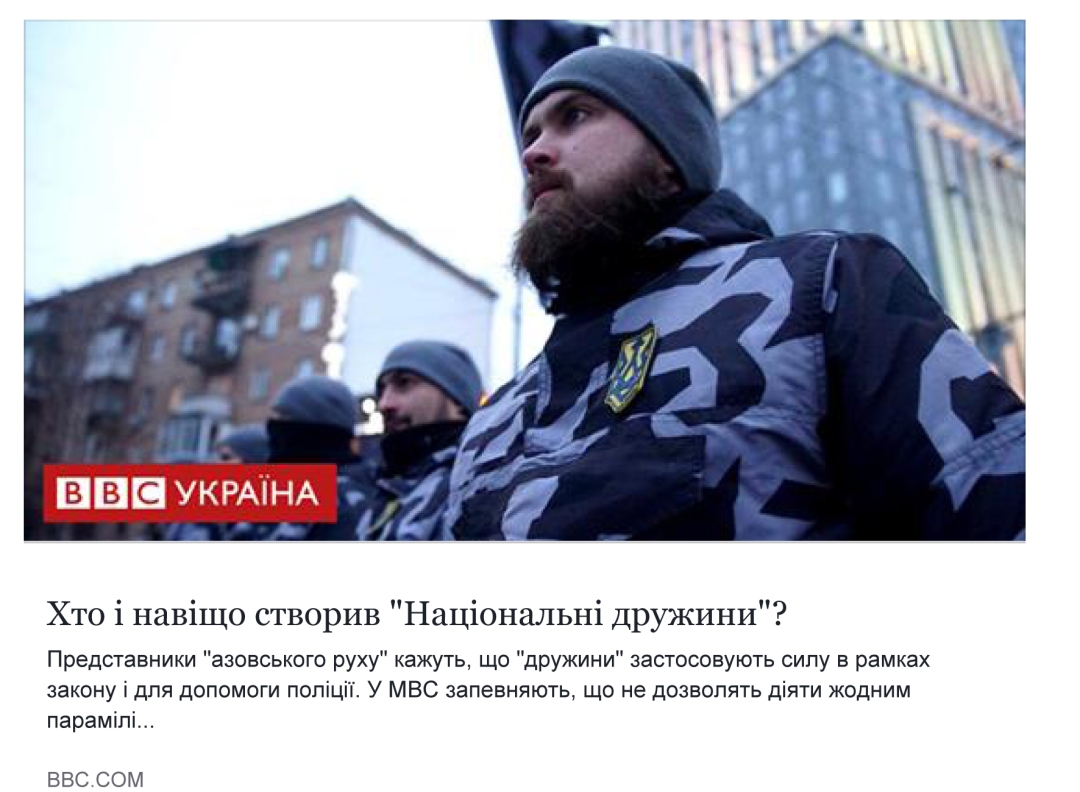 Danger of the far right: Who created the new “National Brigades” and for what?

On 4 February a small but courageous protest took place in Poshtova Square in Kyiv in protest against the new militia force created by the AZOV movement.  This follows a great deal of discussion on the role of the far-right after a parade on 28 January in central Kyiv of the 600 members of a militia linked to the far-right AZOV battalion has raised growing concern over the role of this ‘National Brigade’ acting as parallel force acting in cooperation with the Ukrainian police.

The AZOV movement has roots in the neo-Nazi Social-National Assembly and Patriot of Ukraine,  unlike any other European country this military regiment has been allowed to form a political party National Corps, Azovets  children’s training camps and the militia the Natsionalʹni Druzhyny  (National Brigades).   AZOV continues to use Nazi symbolism, the Wolfangel used by the Waffen-SS Division Das Reich  and the Black Sun the tile of the AZOV regiment newspaper Чорне Сонце.

We publish below a translation of report published by BBC Ukraine.  We have raised concerns previously over the coverage of BBC Ukraine  with regard to the Neo-Nazi terrorist group C14, presented in an Early Day Motion to the House of Commons on Reporting of Ukraine by the BBC by chair of the Parliamentary Labour Party John Cryer.  In the interests of scrutiny and raising awareness of the danger of AZOV we have republished in full translation the latest BBC Ukraine report on this new sinister development in Ukraine.

Who created the “National Brigades” and for what?

On Sunday a march took place in Kyiv of the “National Brigades”, who are linked to the “Azov” battalion and the “National Corps” party.

More than 600 people, wearing the same jackets, some in balaklavas, marched through the centre of the capital to the Kyiv Fortress? where the swearing-in ceremony took place.

“We are many. We are not afraid to use Force in order to ensure Ukrainian Order in the streets” – this was the caption under the video of the march which was posted on Facebook pages of the “National Brigades”.

The representatives of the “Azov movement” declare that “Brigades” will use force only within the rule of law and to assist the police, whereas the Ministry of Internal Affairs assures us that they will not allow any paramilitary groups to act.

At the same time, human rights defenders say that similar organisations call to mind totalitarians movements and are oriented (directed) towards “instructing people on how they should behave”.

What is this and what for?

“This is an organisation, whose aim is the protection (securing) of order on the streets of Ukrainian cities. The composition of the organisation is made up of combatants, patriotic youth and concerned citizens, who share our desire (goal) to improve the security situation” (this is on the website of National Brigades)

On this website you can join the organisation. To do this you need to fill in a short questionnaire, and one question asks “do you have a legal weapon ?” 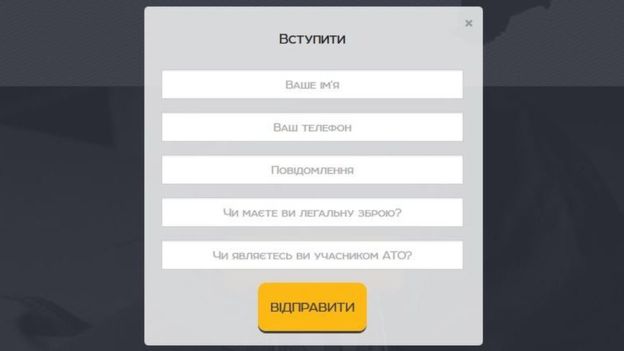 Moreover, on this website you can make a “complaint”. On Tuesday there were about 90 registered, and 65 were already declared resolved.

The details of the “resolved questions” are not given. However, in social media it is indicated that “national brigades” fight against the unlawful sale of alcohol, drug trade and dubious construction projects.

Sunday’s march provoked a reaction in social media, where the “National Brigades” was compared to “storm troopers” of Nazi Germany, and with Soviet “volunteer popular militias”.

The worry (concern) increased against the background of a recent statement by the director of the Institute of National Memory Volodymyr Vyatrovych that the works of Vysotsky and (Viktor) Tsoy ( Russian rock musician 1962-1990) can be used (taken advantage of) by the Kremlin to strengthen the influence of the “Russian world”.

In a BBC Ukraine Commentary, the spokesperson for the “National Corps” party Roman Chernyshev explained that juridically the “national militia” was a separate organisation, but is affiliated to the “Azov movement” (the official leader of the “Brigades” is Ihor Mykhaylenko [who] under the psuedonym “Cherkass” had in the past been commander of the “Azov” regiment.)

He noted that the organisation has existed almost a year and was active in various regions (on FB it it is indicated that there are “squadrons” (detachments?) in 18 oblasts).

The members of “National Brigades” helped the inhabitants of Avdiyivka with food and warm clothing during last year’s shooting by the “DNR” (Donetsk People’s republic,) and also fought against the looting around Kalynivka, when military depots were burning, recalls the leader of National Corps.

In the words of Roman Chernyshev, the “Brigades” are coordinating their activities with law enforcement officers: “ ‘National Brigades’ are working within the rule of law and call out police officers – that is how coordination takes place. They simply arrive at a given place quicker than the police.”

“Sometimes citizens phone and ask for help. And very often in the cities you have joint patrols with the national police,” added the “National Corps” leader.

He emphasizes that “brigades” do not check people’s documents, this is forbidden by law, however they are able to carry out a “citizen’s arrest”: “In the same way as any other citizen, they have the right to carry out a citizen’s arrest – if you see a crime being committed right in front of you, for example, someone stole a handbag, then you have the right to stop this, even by using force.”

Human Rights defender Volodymyr Chemerys explains: if citizens become witnesses to a violent breaking of the law, then they rightly can stop this violence, and in particular they can hold on to the perpetrator. However, at the same time they should immediately call law enforcement officers.

“The law allows citizens to help the police … but not any independent activities”, highlights the human rights defender.

He draws attention to the fact that “In Ukraine there is a serious problem with the growth of ultra-right violence”.

“In a situation, where there is uncontrolled violence on the streets, this is a difficult socio-economic situation, people search for (look for) a strong hand. And so they argue that they are ‘in favour of order’. But all this is just a manifestation of a totalitarian state and totalitarian movements,” Volodymyr Chemerys is convinced.

“This is establishing control over any kind of manifestation of freedom of the person. This can be covered up with nice goals, but is directed at telling people how they should behave, drink, dress, where to go, what kind of ideas they can have and which ideas they cannot have,” he added.

He also blamed far right organisations for attacks “on people who have a different point of view, a different appearance or a different orientation”, which take place “without any interference by the police or even under its patronage”.

Roman Chenyshev considers that the accusations — that the “national brigades” could become instruments of “cultural control” – are not well founded.

“This is a nonsense. Unfortunately a lot of fear has been provoked after the march on Sunday, although it passed off peacefully. For some reason, someone is demonstrating their own phobias and is extrapolating them onto the activities of these lads.”

The “National Corps” party are denying the possibility of using the “brigades” to achieve political aims, in particular in the interests of the Internal Affairs Minister Arsen Avakov (the regiment of the National Guard “Azov” is under the Ministry of Internal Affairs).

“The President and all the ministers are in one way or another representatives of a single command – today’s government … And we are anti-systemic” says Roman Chernyshev.

“To attach to them political sympathies is to engage in conspiracy theory, which is greatly loved by journalists. There is no evidence of this ,” he added.

According to him, the participants of the “brigades” act solely “according to their own convictions”.

On Facebook, “National Brigades” explained the sources of their funding, in particular where the money came from for their uniforms: “All the fighters in the ‘National Brigades” have uniforms and chevrons which have to be earned. We buy all of this using membership donations from our fighters. We don’t have any other expenses and so we do not need any oligarchic sponsors.”

In the meantime, in social media a video has been circulating of the conflict between “National Brigades” and the police, which took place in December last year in Kremenchuk.

There have been conflicts between the “National Brigades” and the police, in particular in actions against construction. Video of a Kremenchuk newspaper

At that time the “brigades” members picketed what they considered to be illegal construction.

A fight started between them and law enforcement officers, and one of the “National Brigades” participants was detained.

On Tuesday Arsen Avakov stated that he would not allow activities by paramilitary formations: “There is a single monopoly on the use of force – the state: the National Guard, the national police, ZSU. All other paramilitary formations, which are trying to establish themselves on the city streets, are not legal.”

“As minister, I will not allow parallel structures to exist, which attempt to act as alternative military formations on the streets”, said the Minister of Internal Affairs.

On Wednesday the leaders of the “National Brigades” promised to explain to the press “who they are, what their goal is and for whom they are a disturbance”. 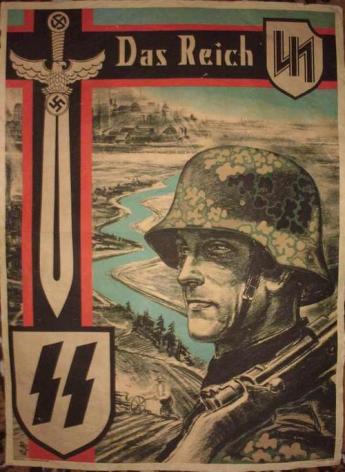 The use of Nazi imagery and symbols by AZOV has been a cause of concern and reflection of their neo-Nazi origin and leadership.  Above left AZOVs symbols and below right – SS Poster.