Ukrainian miners are engaged mass action in the city of Kryvyi Rih with strikes, occupations and a a hunger strike of 400 miners underground in the “Yubileynaya” (Jubilee) mine of EVRAZ Sukha Balka JSC in Kryvyi Rih.

The” ArcelorMittal “workers seized the plant, and the” Evraz Sukha Balka “family of miners blocked access roads to the mines. Around the plant “AMKR” a rally was held of 1500 workers. Then they  occupied four floors of management builidng.  The workers are demanding a € 1,000 (equivalent) pay rise immediately.  They also demand imrovements in health care, no cuts in holidays, and indexation of wages, taking into account inflation in the country.

The Independent Miners Union of Ukraine (NGPU) are calling for urgent international solidarity in their struggle with the oligarchs who own the mining companies.

The oligarchs of the main companies,  JSC “KZRK” (owners include by Rinat Akhmetov and Igor Kolomoisky) and JSC “Evraz Sukha Balka” (owners include by Russian oligarch Roman Abramovich), all pay low taxes and hoard money offshore.  The employers is now trying to break the strike by force, blocking supplies of even fresh water to the miners occupying the mine. EVRAZ are refusing to negotiate with the Independent Miners Union (NGPU) and who are demanding an increase in wages.

Send letters of protest and organise demonstrations at EVRAZ:

Ukraine Solidarity Campaign appeals to the labour movement to support the miners struggle.

According to head of the Independent Trade Unions of Ukraine (NPGU) Mykhailo Volynets, a lot of protesters of two mines of ‘Evraz Sukha Balka’ were staying underground more than a day.

‘The miners of mines ‘Juvileyna’ and ‘Frunze’ of PJSC ‘Evraz Sukha Balka’ are protesting underground and demanding raising wage. Yesterday evening the representatives of administration came to miners and propose to raise wages only by 12% from 1 May.  But miners agree only with wage increasing by at least 20% from 1May and further a gradual increasing of 30% by August.  For now people stay at a depth of 1343 m without food. As I was informed, the administration doesn’t allow the delivery of food them’ – said Mykhailo Volynets.

The Head of the Kryvyi Rih branch organization of the NPGU Yuri Samoilov informed, that today morning peaceful protestі were held for support of the miners JSC ‘KZRK’ and ‘Evraz Sukha Balka’. At the same time the workers of the mine building unit of JSC ‘Evraz Sukha Balka’ showed their solidarity with the miners and blocked access roads to the enterprise.

Workers and trade unions of PJSC ‘ArcelorMittal Kryvyi Rih’ at 8 am also held a peaceful protest near the enterprise building. It was attended by over a thousand employees. The protesters expressed their demands: to rise wages; to stop the dismissals of employees and transferring employees on an outsourcing; to renew the programs for provision of housing for employees etc. Also they expressed their support for miners JSC ‘KZRK’ and ‘Evraz Sukha Balka’. Then the protesters went to the office of PJSC ‘ArcelorMittal Kryvyi Rih’. Workers demanded meeting with enterprise’s management. If the management refuses to meet with the protesters, some of them are ready to start hunger strike.

As it was informed before, miners from four mines of the KZRK, protested underground and demanded to raise salariesю Today the negotiation between  representatives of workers and the KZRK management continues.

As it was informed before,on 4 May in Kryvyi Rih miners from the Kryvyi Rih IronOre Combine (KZRK) have started the protest underground. The Head of the Independent trade Union of Miners of Ukraine  (NPGU) Mykhailo Volynets  informed, that the workers from night shift of mines  “Rodina”, “Guardiiska”, “Ternovskaya” and 10 miners from mine “Oktyabrskaya” didn’t rise to the surface.

During 5 May the miners from four mines of the Kryvyi Rih IronOre Combine (KZRK), who protested underground, rose to the surface. The initiative group of miners and representatives of Primary trade union organization of the Independent Trade Union of Miners of Ukraine (NPGU) began negotiations with representatives of the administration of the KZRK.

Miners of KZRK require salary increase of at least 50%. The head of the women’s committee of city organization NPGU Elena Maslova said that finally constructive dialogue had begun.

“All suggestions and comments were placed on record. For now the protocol of negotiations included two major issues. Firstly, we made agreement that the administration wouldn’t make pressure on the initiators and participants of the protest. Secondly, we agreed to start the detailed discussions on salary increases as soon as possible’.

On 5 May Primary trade union of NPGU of mine ‘Evraz Sukha Balka’ appealed to the administration of enterprise and demanded  to increase salary to $ 1,000. Today they informed the Head of NPGU Mykhailo Volynets that today afternoon the miners of first shift were going to stay in mine and protest.

“The representatives of enterprise hesitate with constructive measures to raise wages. In the same time they are trying to find activists from Independent Trade Union of Miners of Ukraine, who are guilty of these situation”- said Mykhailo Volynets.

On 6 May 10 miners of a night shift from mine “Artema-1 of enterprise ‘ArcelorMittal-Kriviy Rig’ also refused to rise to the surface. They demanded rising salaries. Miners finished their protest after negotiations with representatives of ‘ArcelorMittal-Kriviy Rig’. Miners were promised that on May 11 the problem of raising wages will be solved. But trade union prepares protest 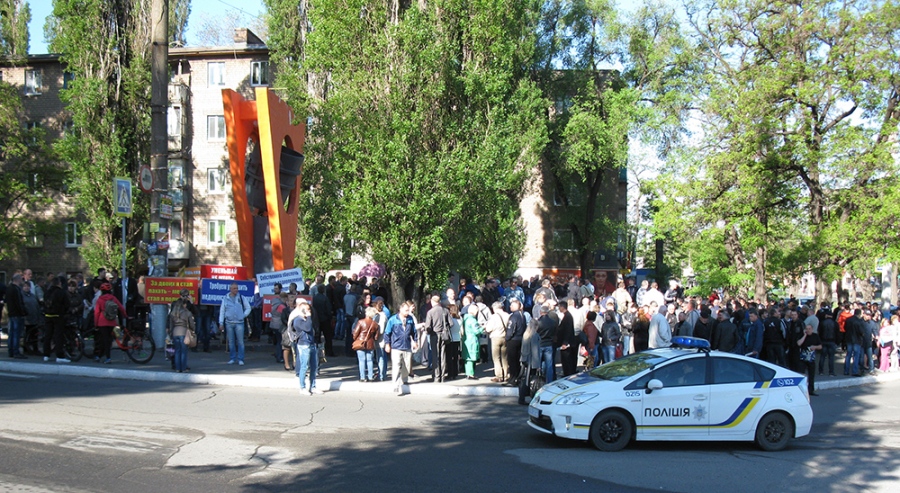