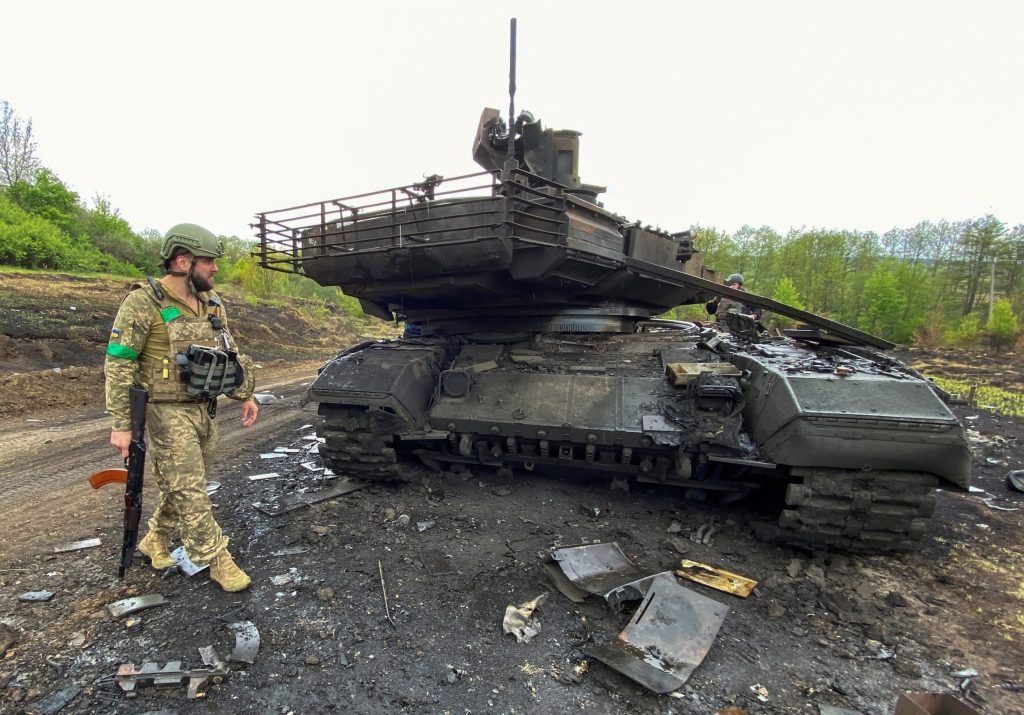 War and Resistance Report No. 6

How is the Russian army performing on the battlefield?

The Russian state under Putin has made a determined effort for the past twenty years to rebuild its armed forces, to equip them with the latest weapons, educate the ranks and professionalise their commanders. Its forces have gained valuable experience fighting in Chechnya, Syria, the Central African Republic and Eastern Ukraine. They have had ample funding thanks to the revenues flowing in from the oil and gas trade. The overall aim was to transform the conscript army into a more professional force capable of operating in smaller units that could work autonomously in the field, co-ordinate aerial, sea and land forces by themselves, to call in artillery and air cover, and decide battlefield tactics. They should no longer have to take instructions and get permission at every step of the way from their supreme command.

There are now three main layers of troops: the elite offensive units, typically headed by paratroopers; followed by career officers, contract soldiers and mercnaries with prior experience in war fighting; and finally the traditional conscript army, the proverbial cannon fodder and menial task takers.  All three of these layers are brought together into battalion tactical groups (BTG) each of around 1,000 fighters. The main criteria of their effectiveness in fighting is no longer their numbers or firepower, but their capacity to combine and apply all the instruments of fighting with speed and agility.

According to Khrysto Grozev, researcher at Bellingcat, Russia lost 90% of the paratroopers it sent into Ukraine in the first two months of the invasion. It also lost 4,000 mercenaries from its second echelon of offensive troops A significant portion of such contracted soldiers refused to renew their contracts and continue fighting when the Russian army was regrouping for the second offensive. Grozev doubted the Russian command could put together any more than 60-70 battalion tactical groups. New York Times on 19 April cited a Pentagon report that Russia had increased their number in Ukraine back to 76. At the height of development of battalion tactical groups Russia had close to 150. However, the Russians appear to have recovered from their heavy losses: on 16 May the Pentagon estimated on the basis of satellite images that there were 106 operational BTGs in Ukraine, about three quarters of their total number. It had no information to offer about the number of troops in them, their equipment or their combat readiness, but it was reasonably confident the Russians have proven able to return to strength and maintain it despite ongoing losses in the field. Russia’s third echelon of new conscripts need to be trained and deployed with considerable haste. Grozev estimated the replenishment of the army by a new conscription would not improve, but depress its overall effectiveness in battle. The outcome of further engagements will show if he is right.

The battalion tactical groups trained in 2021-22 for two strategic undertakings: to surround and defeat the Ukrainian army on the front facing the Donbas in the east and to land its best forces from the sea in order to help land forces secure the coast from Donbas to Crimea. Success is highly dependent on the availability of professionally trained and battle-hardened soldiers and officers, precisely those components of the Russian army that suffered heavy defeats and high casualties and whose survivors then refused to continue to fight. The sinking of its flagship troop carrier Moskva in April put another hole in its plans.

The Russian forces now in Belgorod oblast, including the 38th Mechanised Brigade of the 6th Separate Army which was defeated and driven out of Kharkiv, are now being reorganised into new tactical battalion tactical groups. They are being redeployed southwards into Donbas for the latest Russian offensive on Severodonetsk, Volodar and Bakhmut.

The Ukrainian Ministry of Defense has identified three major problems the Russians are trying to resolve in this reorganisation: a lack of unit level trained leaders, low morale overall and the inconsistent air combat support given to its ground forces. None of these problems can be addressed and fixed quickly.

On 11 May the Russians suffered a defeat that shook their confidence even more.Their commanders ordered 550 soldiers of 74th Motorised Brigade to cross the Siverskiy Donetsk River at Bilohorivka on temporary pontoon bridges. This as part of their attempt to encircle Ukrainian forces on the Donbas front. The operation was tactically inept and hurried, as a result of which the Ukrainians killed and wounded at least 385 of them and destroyed 80 units of mobile equipment. For the army, as well as for civilian observers reporting this event in social media, it is a catastrophe, the worst in the war for Russia so far. One more of its tactical battalion groups has been destroyed, possibly two.

Bloggers serving in the Russian  army, including Yuri Podoliaka with 2.1 million followers on Telegram, are voicing their anger and dismay at the ineptness of the Russian command.

Other evidence  of decay in the army is coming from independent social media sources. There are reports appearing since early April about regular servicemen, contract soldiers and National Guardsmen deserting their posts in Ukraine or refusing beforehand to leave for the front. Others are resigning collectively and handing back their weapons while already on the front. One begins to see why the Russian government is hesitating to announce a new conscription drive that it will need as it takes more losses of this kind. It is not even prosecuting soldiers where such actions fall within the definition of a violation of the Russian Criminal Code because it does not want to publicise such occurrences and to encourage more of them.

There are also reports in social media of arson of army recruitment centres and bureaux holding data on conscription eligible cohorts in their population. Some factories producing for the front have been firebombed.

Russian media pundits are talking more openly about the underlying weaknesses of the armed forces, why the Ukrainian side has withstood attempts to subdue and conquer it. The pundits point to the lack of preparation for the invasion, inadequate reserves to fight a longer war, an inability of its weapons producers to resupply the army in good time, the army falling back on Soviet era weapons in the absence or inoperability of the new ones. The Russians can’t make precision strikes or hit moving targets from their aircraft, so they drop big bombs and fire missiles into towns and cities.

Neither side in this war is disclosing any information about its own losses in battle, except the Ukrainians reporting how many civilians are being killed and wounded. These figures are incomplete for obvious reasons, and reports by either Ukrainians or Russians about military losses on their opponent’s side cannot be verified or trusted. But the dynamic of the invasion and resistance to it can be discerned: the waves of offensives, the capture and loss of territory, regrouping of forces. Even the results of specific engagements can be analysed  thanks to military intelligence by Western governments and research by independent investigators into open source data.

All told, the Ukrainian and Russian armies appear a closer match at this stage in the war than previously imagined when the invasion started. With the USA, Britain, Germany and other Western states supplying the Ukrainians, and the Russians still unable, it seems, to get China to resupply it with critically short electronic components, the war could go on for a long time. No-one should underestimate the Putin regime’s tenacity and readiness to take more extreme measures, especially if it is facing defeat.

I will be publishing no further Reports until there is a fundamental change in the war and the relations between Ukraine and Russia. This is because mainstream international media now provide such in-depth coverage that this blog has become little more than a clipping service. However, I will offer from time to time my analysis of the wider international developments surrounding the war.