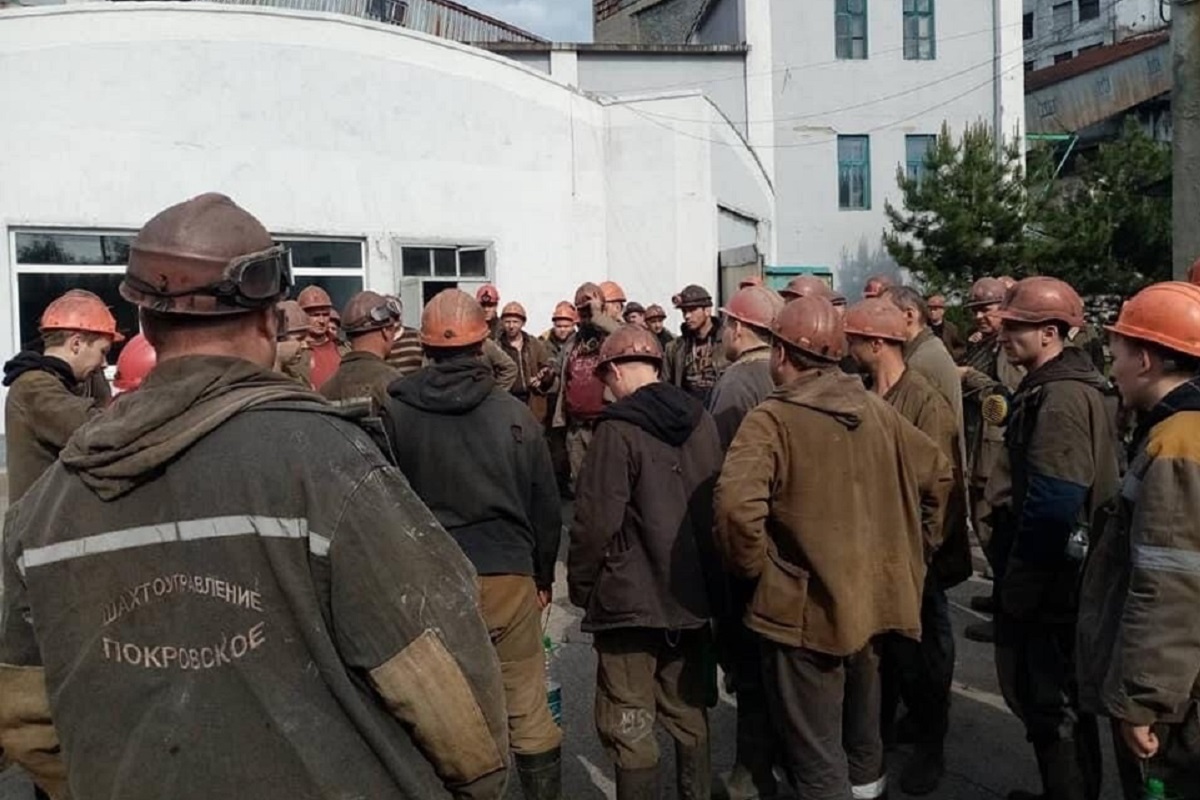 Mineworkers have ended an underground occupation in separatist-controlled territory in Lugansk, eastern Ukraine, after bosses paid most of the wages they were owed. But 14 trade union activists are still under arrest by the authorities of the Russian-supported “people’s republic”.

The sit-in by 119 mineworkers at the Komsomolskaya mine in the city of Antratsit, which started on Friday 5 June, ended in the early hours of Saturday 13 June. They were paid a large part of the wages they were owed, promised the rest by this week, and assured that there would be no more arrests.

On Friday, about 100 people gathered in the town square at Antratsit to support the miners. Pavel Lisyansky, Ukraine’s human rights ombudsman in the area and a long-standing trade union activist, said in a facebook post:

I have been informed that the final decision to accede to the protesting mineworkers’ demands was made on account of the solidarity protest by people in Antratsit. The Russian federation’s occupation administration feared that this protest would spread, especially since international trade union organisations had begun to speak out about the strike.

Lisyansky said on Saturday that an electronic and transport blockade of Antratsit, and the

Dubovsky area around the mine, continued, and the fate of activists arrested last week was unknown. The internet was blocked, although Whatsapp and similar services worked.

Aleksandr Vaskovsky of the Independent Miners Union of Donbass said, in an interview with News.ru, that 21 activists – based in Krasnodon, Rovenki, Krasnyi Luch and Belorechensk, as well as Antratsit – had been detained last week. Some had been tortured.

According to News.ru, Azamatkhan Karimov, an activist of the Workers Control group, had reported that seven of these 21 were released on 9 June. Karimov said that the detainees included three workers from the Komsomolskaya pit: the brothers Igor and Vitaly Yefanov, and Evgeny Mikhailichenko. The Yefanov brothers were arrested at home by armed officials from the Lugansk “republic” ministry of state security, who had threatened their mother.

Lisyansky reported that detainees had been charged under article 252 of the Lugansk “republic” criminal code that outlaws “repeated breach of established order, organisation or conduct of assemblies, meetings, demonstrations, marches or pickets”. There are penalties of up to five years in prison.

(If readers come across any of those pathetic western “anti-imperialists”, who think there is something progressive about the separatist “republics”, they might remind them of article 252.)

Aleksandr Vaskovsky of the mineworkers union explained the background to the Komsomolskaya dispute – the most significant workers’ collective action in eastern Ukraine in recent years – in an interview with MK, the Russian newpaper.

Russia has encouraged citizens of the separatist “republics” to take Russian citizenship. Many who had done so had appealed to the Russian government to intervene, Vaskovsky said.

After the separatist “republics” were formed in 2014, the Lugansk mines had remained in the hands of the DTEK group of companies, owned by Rinat Akhmetov, one of Ukraine’s richest men. The coal had mostly been delivered to Ukraine, and mineworkers had mostly been paid on time.

At the end of 2017, Vaskovsky said, the Lugansk pits had been “nationalised”, but had in fact ended up controlled by Vneshtorgservis, a company headed by Sergei Kurchenko, a businessman closely linked to Viktor Yanukovich, the former Ukrainian president who was overthrown in 2014. “And after that transfer took place, they just simply forgot about the mineworkers. Back debts [for wages] started to accumulate.”

Vaskovsky said that, at first, mineworkers were told that if they were patient the money would arrive. But then the authorities implied that people had better keep quiet about it. The situation in Lugansk was worse than in the Donetsk “republic”.

The first underground protest was staged at the Komsomolskaya mine in April – and ended when managers literally put cash int hold-alls and took it underground. Then, they promised to clear remaining debts by15 May. That did not happen, and that in turn triggered the sit-in on 5 June.

Mineworkers at three other pits – Belorechenskaya, and the Vakhrushev and Frunze pits – had indicated support for the Komsomolskaya demonstrators last week. Authorities feared that the action could spread.

Asked by MK whether the mineworkers feared that, having ended the occupation, the authorities might break their promises, Vaskovsky said:

In principle, we can expect anything. At this moment they have handed to people sums of money that, for them, are very large. They haven’t had this sort of cash in their hands for a long time. Of course, they are happy.

MK asked whether those who had cheated the mineworkers could be made to pay for their actions. Vaskovsky replied:

Yes, it seems so. But as long as we don’t organise at all the pits, and teach ourselves how to insist on our rights, we can not expect anything good. At this moment we are fighting to have elementary, basic rights observed. And then, in time, we will be ready to fight to raise the level of wages, to increase the price of labour power, to improve the conditions of work. And we plan, too, to start organising around political demands.

Let’s make the defence of those who have been arrested a cause for labour and social movements everywhere. For example, organisations in other countries could make contact with the Eastern Human Rights group. This is perhaps the most meaningful way that we can express solidarity with workers in Lugansk. GL, 14 June 2020.

Republished from People and Nature :