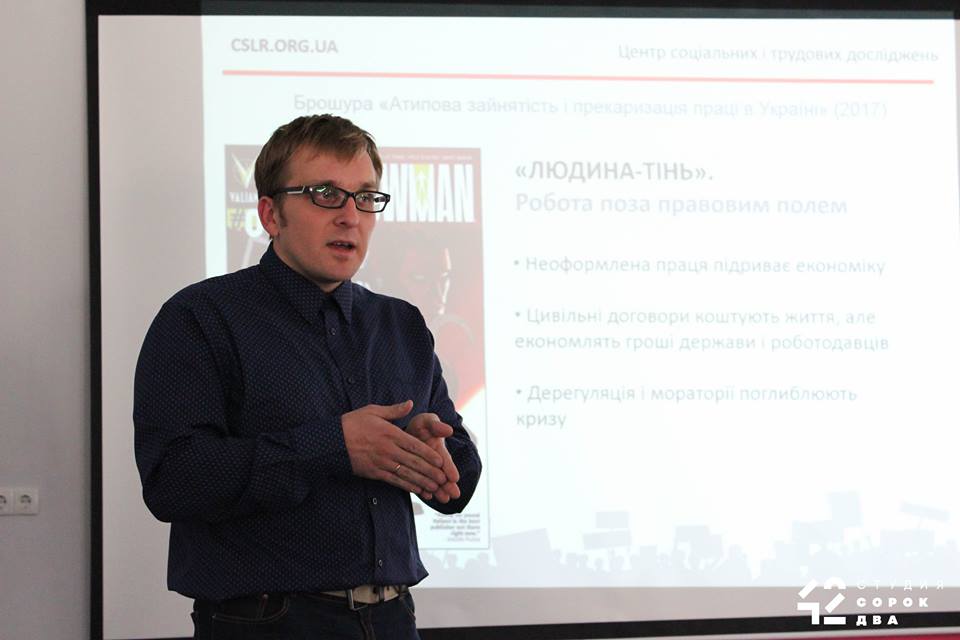 What will happen now  in Ukraine after the Presidential election? Christopher Ford organiser of the Ukraine Solidarity Campaign  interviewed Vitaliy Dudin an activist of the NGO ‘Social Movement’ and leading trade union solicitor in Ukraine.

What does the election of Zelensky as President of Ukraine represent?

People are very tired of the neoliberal mainstream. Of course noboby knows exactly what the next steps of the new President will be, but a lot of citizens associate the new leader with the ending of the policy of Poroshenko. His course was driven by personal economic interests and a conservative political agenda. Those factors are a huge obstacle to peace. But we should have no illusions. I think that the election of a new President will be some kind of new social contract with oligarchy. I mean the close connection with Kolomoyskiy.

I think that the election of a new President will be some kind of new social contract with oligarchy.

Many of the aspirations of the Euromaidan rebellion, ending corruption, greater equality, human rights and democracy have not been realised, was the election a judgement on the entire Euromaidan project as some claim?

I don’t think that voting for Zelenskiy  is somekind a ‹water shed› between critics and supporters of Maidan.  A lot of patriotic Ukrainians had given their votes for him. Zelenskiy bears both the progressive and negative agenda of Maidan. For example, he promises to end the special status of MPs, but at the same time he promotes liberal ideas like reducing taxes for business. His policy could be similar to Poroshenko’s, but he will use other, more democratic methods.

I don’t think that voting for Zelenskiy  is somekind a ‹water shed› between critics and supporters of Maidan.

Zelensky gained a majority in regions across East and West Ukraine, what does this mean for Ukrainian politics and previous divisions?

It shows that everywhere people are fed up with right-wing populism. Maybe this moment gives a chance to build up strong ties between two parts of country. But at the same time we should understand that it can be nothing more then short-term sympathy, raised by the media-machine.

Ukrainian political life has been dominated by a capitalist oligarchy, has this changed?

Definetely not. Everything is stable. Some oligarchs may be oppressed by the new system, but other oligarchs will be safe. Also I think that competition between the richest people will be stronger. We will have a strong opposition from a pro-oligarchic parliament. This gives a chance for a people’s mobilization.


There is an argument that globally we are seeing a reconfiguration from what has been described as neo-liberalism to one of national populist dominance, the system of multilateral trading giving way to a more competitive and hierarchical system, of unilateral ‘my nation first deal’ such as with Trumpism and Brexit. Are we seeing a realignment in Ukraine of the oligarchy to reform the state in their interested?

I don’t think that Zelenskiy is ready for the realisation of such a mission. Also I don’t think that Poroshenko’s rule was a pure example of neoliberalism (his interests often dominated over technocratic logic). I think that the new President will be under pressure from Kolomoyskiy, parliament and international financial institutions. His authority will be weak.


It was previously contended by some that Ukraine can only face two choices either a European form or a Russian form of oligarchic capitalism, is this still the case?

I think that we a chance for the «Third way» – building a Ukrainian form of oligarchic capitalism. I mean the configuration of 2005-2009 during Victor Yushchenko. Power will be very decentralized – every oligarch will get some influence on state policy.


Zelensky has outlined a need for a break from the ‘old system’ and reform in key areas such as corruption, the justice system, tax etc? what change can we expect and how will it meet expectations?

I think that he will punish some corrupt officials, but he can’t eliminate the corruption. The Justice system will be changed only cosmetically. The tax system may be changed according the demands of IMF, because of the influence of Alexander Daniliuk. I don’t think that they are interested in elimination of tax-avoidance using offshores etc.

There remains a Ukrainian national question, Russia’s occupies territory and engages in aggression, issues of overcoming the legacy of colonialism remain such as the Ukrainian language question. How will this be addressed under the new Presidency. Can it be solved?

Zelenskiy is not a very convenient opponent for the Kremlin, because it is much easier for him to communicate with people who speak Russian in Ukraine.  I don’t think that Zelenskiy could reintegrate the Eastern territory, because it is a very complicated question. It needs a change of government in Russia and strong support from the the West (debt relief, for example). But I think he can act in order to lower the hatred in our society (it exists on such grounds like language, history). I hope that he could make some efforts to defend a civil rights in Ukraine. A Ukrainization policy will be a very difficult task until we also solve the social problems (poverty etc). Though we have still saw no actual plans on this by Zelenskiy.

What has been the response of the Ukrainian far-right to the election outcome?

C14 are very nervous, because some of them will lose their jobs. Maybe they continue to cooperate with team of Poroshenko. «Svoboda» could lose their positions, because the rhetoric of Poroshenko will be very nationalist. «National Corpus» has a neutral reaction, because Arsen Avakov can hold his post.


How will these elections impact on what Ukrainian politics might look like in the build up to the Parliamentary elections?

I think that parliament will be very diversified, but it hardly could be called «new» or «fresh». I think that the teams of Zelenskiy, Poroshenko and even Boyko will have strong fractions. Of course there is not enough time  to develop a left party which represents interests of workers.

What attitude has the Labour Movement taken to the new situation?

Workers had no consolidated vision.  One of the biggest trade unions supported Yuliya Tymoshenko. I think they will be very «constructive» and are ready to cooperate with new Government and President.


What are the prospects for a successful alternative to the oligarchic politics which has dominated Ukraine.

We should show that only left deputies are ready to protect real militant trade unionists. Only cutting any ties with oligarchs gives a chance to end the offshoring . Also we should fight for a more democratic and inclusive political system – today only people with big money can be elected.


Socialism has suffered under Poroshenko, history has been weaponised against the Ukrainian socialist tradition, what are the prospects for socialist revival in Ukraine?

Socialist ideas are looking like something prohibited and illegal. Of course, this provokes more interest.