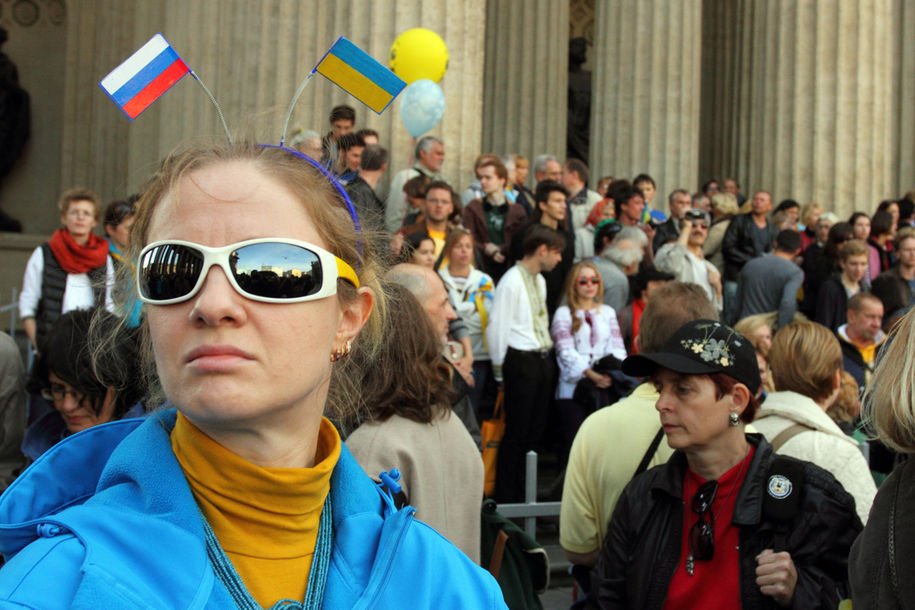 The Conflict in Ukraine, and the Russian New Left

Revolutions and their Translators: Maidan, the Conflict in Ukraine, and the Russian New Left

Most accounts of the conflict in Ukraine reproduce the familiar Cold War binary. For the Russian government-controlled TV channels, Maidan (Ukraine’s revolution of the winter 2013–2014) was a fascist coup that overthrew the legitimate government with the US imperialist support. For the liberal media in the West, Ukraine, and Russia, Maidan was a popular democratic uprising against an authoritarian regime that was rooted in the Soviet past. Both these accounts claim to draw on real facts and each obscures much in the real situation.

Is a different view possible? A constructive perspective has been formulated by Russia’s “progressive left”—political activists, philosophers, historians, and artists who are in the opposition to Russia’s political regime and have been Maidan’s organic allies. The following simplified version of the left perspective cannot do justice to the full panoply of the movement’s views and disagreements, let alone to the complexity of the situation in Ukraine. But it may highlight some paradoxes that many accounts obscure.

As part of the Russian political opposition, the progressive left—aka, the new left—are among the most politically active and analytically sophisticated movements (albeit considerably smaller than liberal oppositional movements). The designation “new left” points to the movement’s post-Soviet political genealogy, which distinguishes it from such “old left” parties as the proto-Stalinist Communist Party (KPRF) and the left-right National Bolshevik Party (NBP), whose ideologies consist of an unlikely mix of Marxism-Leninism and Russian nationalism. Unlike them, the new left are genealogically linked to Western Marxism and the post-1960s progressive movements. They would be recognized as progressive intellectuals on American universities campuses and on the pages of New Left Review. Not surprisingly, most of them, contrary to KPRF and NBP, have strongly opposed the Kremlin’s interference in Ukraine.

In February 2014, a collective of new left artists and philosophers from St Petersburg and Moscow, Chto Delat?  (What Is to be Done?), published an open letter to the organizers of “Manifesta 10” international art biennale that was scheduled to take place in St Petersburg in June-October 2014. Chto Delat called for the cancellation of Manifesta in protest of Russia’s intervention in Crimea: “The government of our country committed a shameful act. To be sure, they have done shameful things before, but what is happening today is so outrageous that carrying on with ‘work as usual’ can no longer be justified.” Manifesta’s international organizers refused to call it off, and Chto Delat’ withdrew from it in protest.

Despite denouncing Russia’s intervention, these activists also resisted the dominant interpretation of the Ukrainian revolution offered by Western media and Russian liberal opposition. For artist Dmitry Vilensky, Maidan was a source of both hope and disillusionment. What he witnessed there was a “lesson in civic mobilization” and also a striking example of how democratic values can become substituted with ultra-nationalist ones. This happened “even at the level of micro practice,” when the invaluable elements of progressive politics that emerged at Maidan—“self-organization, solidarity, courage, mutual aid”—were appropriated by the far-right.

Historian and activist Ilya Budraitskis relocated to Kiev in January 2014. He saw a “remarkable revolution” in the making, when thousands of common citizens sharing “determination and a democratic instinct” became united in an unprecedented, well-organized, armed opposition. But he also witnessed a kind of political inversion—the “leading and most organized force of this democratic Maidan, which helped the majority of protesters to abandon their remaining reverence to the state and the police” was itself “fundamentally anti-democratic.” At the level of infrastructure Maidan looked like “a text-book example of a full-fledged city uprising … breathing real revolutionary consciousness.” But that uprising was covered with unfamiliar signs—“endless Celtic crosses and [Nazi] runes on the walls, … a kaleidoscopic agitation by every ultra-right party and sect … each with its own tent, handing out literature, organizing lectures and film screenings” about ultra-nationalist heroes. “It was all very politically active, well organized and ultra-right.”

Attempts to hijack the democratic revolution for an ultra-nationalist agenda are not unique to Ukraine. We have witnessed them in Eastern Europe since the fall of Communist states. One example has been the relentless attempts to equate the communist past with fascism. While some may describe this equation as “understandable” after long years of Soviet domination, the problem is, as Slavoj Žižek argues, that it secretly privileges fascism. One hears that a form of fascism that existed in Eastern Europe “was a justified response to the communist threat.” In Slovenia today “the right is advocating the rehabilitation of the anti-communist Home Guard which fought the partisans during the Second World War” because they “made the difficult choice to collaborate with the Nazis in order to thwart the much greater evil of communism.” A nationalist rhetoric that reinterprets the history of local fascist brigades as anti-communist “resistance fighters” circulates today in many parts of Eastern Europe and the Former Soviet Union, including the Baltics, Russia, and Ukraine.

Russia’s new left have been walking a tight line. For them a simple critique of the far-right dominance at Maidan is problematic because it ignores the revolution’s democratic momentum and plays into the hands of the Russian government’s anti-Maidan propaganda. However, refusing to oppose the ultra-right, “pretending, as most Russian and Western liberals do, that they were all an invention of Putin’s television,” means supporting the nationalist theft of a democratic revolution. Both positions are untenable ethically and politically. The same dilemma is repeated in the case of the situation in the Donbas. As Budraitskis puts it: “If in one case, … the analysis of the situation in the Donbas completely ignores the fact of Russia’s direct interference and what goes on there is described simply as a ‘civil war’, in which the government of oligarchs from Kiev is fighting against its own people, and in the other case, on the contrary, everything is reduced to Russia’s covert intervention, and all objective elements of the internal conflict there are consistently ignored—then what we face is another cunning ploy.”

Among the “objective elements” of this conflict is post-Soviet chauvinism that has been directed at the predominantly Russian-speaking people of the Donbas from the outside. How real and consequential this chauvinism is has been the subject of much debate. Ukrainian historian Andriy Portnov sees its reflection in the nationalist discourse of the intellectual circles in Ukraine’s West and Center. That discourse, which Portnov calls “Galician [Western Ukrainian] reductionism,” represents the people of the Donbas as backward and “hopelessly Sovietized” and argues that Ukraine will succeed only if it gets rid of them or changes them beyond recognition. This irony is that this nationalist rhetoric shifts the responsibility for the current tragic situation in the Donbas from the historic inequalities, political elites, or external intervention “onto the region’s population, strik[ing] a chord with Putinist propaganda, which seeks to show the world that Ukraine is not a proper country, a random outcome of the Soviet Union’s collapse, and a country deeply divided.”

All other sides rely on extreme reductionism too. An example is the term “fascism” frequently used to describe one’s opponents in this conflict. Because fascism is associated with absolute evil, using this term radically precludes elaborations and discussions, presenting the world as uncomplicated and making it easy to take sides. This is why the Kremlin-run media uses it with such relish. However, the same tactic is frequently employed by the US and Western European mainstream media when it compares Russia’s actions in Ukraine to those of Nazi Germany and Putin to Hitler.

The only politically viable and morally justifiable position in this conflict, argue the new left, is to refuse all binary accounts in favor of a critical third position. It should insist that under the current terms neither side in the conflict “is ours” and that the main objective is to stop the devastating war in the east. At the same time, one should not forget that it is Ukraine, and not Russia, that has been subjected to covert foreign aggression, which is why anti-war actions directed at both Ukrainian and Russian states should also contain a strong anti-Putin message. It is equally important to support the democratic potential of Maidan, while critiquing the ultra-nationalism that has spread in connection to it. “Russian antiwar movement that opposes its government can be truly honest and effective,” argues Budraitskis, “only if it joins a similar movement in Ukraine. . . . In Moscow and Kiev we must question again and again the state’s monopoly on representing ‘the nation.’”

Alexei Yurchak is Associate Professor of Anthropology at the University of California, Berkeley.