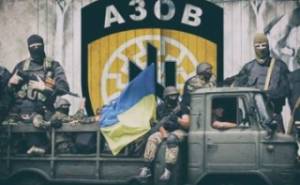 It had seemed hard to imagine a better gift for Russian propaganda than a Ukrainian volunteer battalion formed by men with pronounced neo-Nazi views and a penchant for flaunting the wolf’s hook and other such symbols.   Even more fodder for Russia’s propaganda machine could soon be provided if one of the Azov battalion’s leaders is not kept well away from the coming parliamentary elections.

Type in ‘neo-Nazi’ and ‘Ukraine’ on Google, and you’ll find plenty of Russian propaganda and also a number of articles about Azov.  There continues to be worryingly little about thewell-researched direct ties between many leaders of the Kremlin-backed militants in eastern Ukraine and Russian fascist or neo-Nazi parties, such as Dugin’s Eurasian Youth Union and the Russian National Unity Party.  There are also a large number of members of these parties among those fighting with the militants.

That was one of the reasons why many people, the author included, who are revolted by the neo-Nazi views of Azov’s Andriy Biletsky or Ihor Mosiychuk said little publicly about their concerns.  There is, of course, another reason.  These battalions were formed when Ukraine’s army was still floundering against militants trained and heavily armed by Russia to fight the latter’s dirty war.  The volunteers were risking their lives and many have been killed defending their country.  What are you supposed to say?  We hate your views, go home?  Where, incidentally, do we draw the line as to ‘acceptable views’?

The same questions were raised during EuroMaidan when Russian and western media endlessly discussed the likely dangers of the extreme nationalist Right Sector, as well as of the far right VO Svoboda.  Russian propaganda is continuing to demonize both parties despite the presidential elections in which the two candidates together scarcely scraped 2% of the vote.

Ukraine is facing the gravest threat to its sovereignty and independence and is facing it alone despite the self-evident danger to all neighbouring states if Russia’s aggression goes unchecked.

It is inevitable in these circumstances that men or women who have placed their lives on the line in defence of their country will be regarded as heroes by a large part of the population.  Their views will not gain support as a consequence, but it would be naïve to underestimate the number of people whose vote will be determined by a person’s role in the war, not their political programme.

It is quite certain that seasoned politicians will not forget this for a second.  This danger was highlighted at the beginning of September by Viacheslav Likhachev who has monitored xenophobia, the far-right and anti-Semitism for over 10 years.

He writes that a specific feature of the present time is that “nobody is interested in the political programmes of parties seeking to take part in the electoral race.”  Many Ukrainians, he says, see the political leadership as indecisive, if not guilty of treachery, and are tired of all the anxiety from the military action.  They’re “ready to support any party which will use the image of brave unshaven men from the trenches in their electioneering.”

He points to the overt attempts which the leader of the Radical party, Oleh Lyashko is taking to gain mileage out of this situation  Whether Lyashko’s contribution to the  activities of the volunteer battalions is as great as he implies can be questioned, but it is clear, Likhachev writes, that his campaign will be based on carefully chosen photos of himself with weapons surrounded by volunteer soldiers.

As of September 10, however, there is another danger and it is serious.  The congress was held on Wednesday of a new “People’s Front” created by  the current Prime Minister Arseny Yatsenyuk and parliamentary speaker Oleksandr Turchynov.  It is known that the Front’s parliamentary candidates will include journalist and civic activist Tetyana Chornovol and Dmytry Tymchuk who has been chronicling Russia’s hybrid war against Ukraine from the first days.

Members of a ‘military council’ were elected, with these including Andriy Biletsky commander of the Azov Battalion.

It is not clear as yet whether Biletsky could run for parliament in October, however any role for a man who in peacetime was (and remains) leader of the Social-Nationalist Assembly [SNA] and ‘Patriot of Ukraine’ is entirely inappropriate..  According to Anton Shekhovtsov, researcher on far-right movements, “the SNA is a neo-Nazi movement, which has always been too extreme for the Right Sector. According to its official documents, its ’nationalism is racial, social, great-power imperialist, anti-systemic (anti-democratic and anti-capitalist), self-sufficient, militant and uncompromising’. Its ideology ’builds on maximalist attitudes, national and racial egoism,’ while glorifying the Ukrainian nation as part of the ’White Race.’

More can be said, however the above is surely sufficient to understand why Biletsky’s involvement in the People’s Front, let alone his election to the Verkhovna Rada, would be disastrous for Ukraine and a slap in the face for those who upheld Ukraine’s right to European integration through the long months of EuroMaidan.

Those who have fought, and those who died in defending their country deserve our gratitude.   Political support, however, must be earned in different ways.  One is for the leaders of all political parties to spurn populist moves and distance themselves from members of volunteer battalions whose unquestioned bravery and commitment cannot justify views which have no place in the democratic European country Ukrainians have demonstrated their will to build.

The following article was published by the Kharkiv Human Rights Protection Group. http://khpg.org.ua/en/index.php