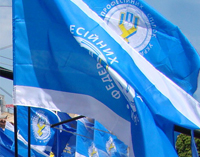 First of all, it concerns the property rights of trade unions and their organizations in all regions of Ukraine, because the mentioned draft laws provide for illegal compulsory alienation, in fact confiscation of office premises, training centres, health resorts, sports, tourist facilities which they have owned legally for many decades.

After adoption of the Constitution of Ukraine, Civil and Economic Codes of Ukraine, during the period of independence, the ownership rights of trade unions were recognized by the state and formalized by trade unions in accordance with existing legislation (registered to obtain the title of ownership). Thereby the state officially recognized trade unions as legal owner. Their ownership includes social-cultural, sports, recreational and tourist facilities. For decades, millions of workers and their families, victims of industrial accidents, Chernobyl victims, labour veterans, participants in the Anti-Terrorist Operation have been using the services of trade union sanatoriums, sports and tourist facilities, restoring their health and ability to work. A significant part of the facilities was built, reconstructed and maintained at the expense of trade union and other non-state resources, funds of labour collectives, by labour of millions of trade union members of many generations. At the same time, dozens of facilities which were previously forcefully confiscated from trade unions and transferred to state ownership are in ruined condition and unused. Some 4,000 workers have lost their jobs, the state does not receive hundreds of millions in taxes, and people are deprived of social services.

It should be noted that over the past three decades there have been repeated attempts to unlawfully confiscate trade union property. However, all judicial authorities, including the Supreme Court of Ukraine, rejected these attempts, confirming the trade unions’ right of ownership.

In 2011-2013, the then so-called “criminal government” tried to seize some trade-union owned facilities by raiding in order to subsequently sell them to “trusted people”. Only the 2014 Revolution of Dignity stopped this blatant and brazen robbery.

Is it possible that the current, already democratic government seeks to continue the unlawful actions of its predecessors, or is this government doing so bad that after the sale of the state property, the budget can only be balanced by looting non-governmental organizations?

The European Court of Human Rights has already draw attention to the evident inconsistency of the national practice of Ukrainian courts concerning the status of the trade unions’ property and also to the illegality of interference of the state in the property rights of trade unions under the Convention on Human Rights and Fundamental Freedoms (with the corresponding protocols).

We demand from the authorities to stop violation of the Constitution, to put an end to the pressure on trade unions and non-governmental organizations, and from the Cabinet of Ministers to immediately withdraw these draft laws.

In case our demands are ignored, we call trade unions and public organizations for consolidated actions of in order to give a resolute response to any attempt to violate the Constitution and the Law, up to presenting political demands, as well as to demand that the officials – initiators of obstructing legitimate activity of trade unions and other NGOs – be brought to justice in accordance with the legislation.