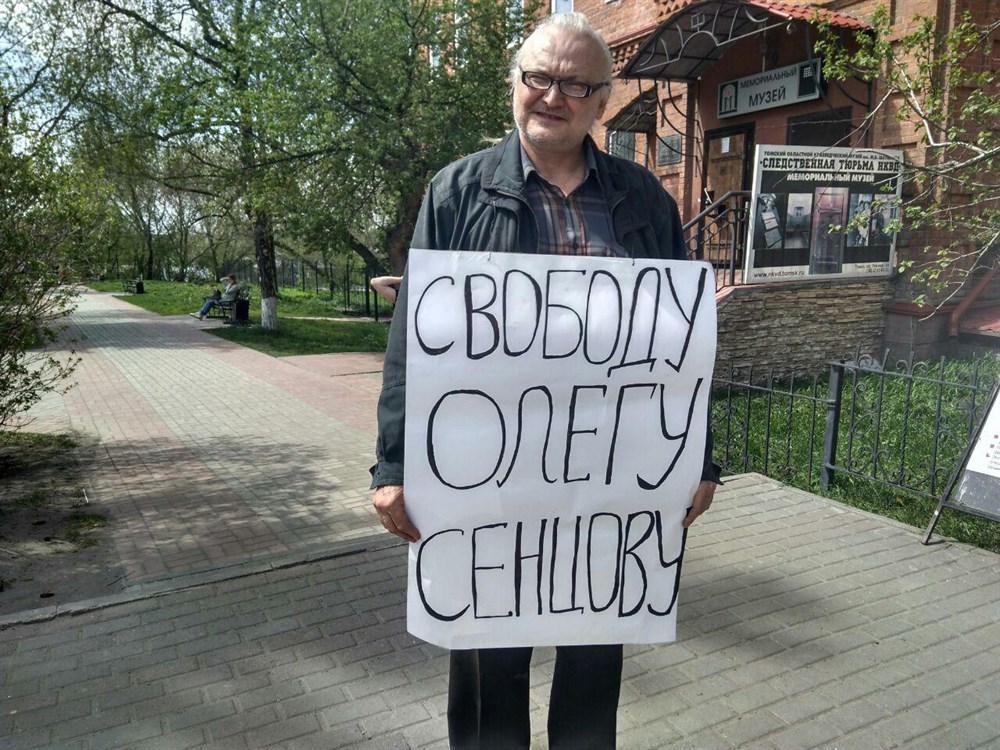 On 16 September an activist of the Russian socialist organisation ‘Left Resistance’ Igor Kuznetsov,  known on-line as ‘Yaroslav Solntse’, was arrested in Tomsk.

Kuznetsov has repeatedly spoken out on-line and at public events  against Russian imperialism and the aggression against Ukraine, for the right to self-determination for all peoples, especially those subject to Russia, in support of political prisoners, including Ukrainian prisoners.

I met Igor Kuznetsov in 1999 at the founding conference of the ‘Movement for the Labour Party’ in Moscow. He then represented the Siberian Confederation of Labour of which he was one of the founders. Later he was an activist of the ‘Marxist Labour Party’.

Sometimes I envy his tireless energy and faith in socialism and the future of our countries. I would especially like to note his genuine internationalism and complete rejection of chauvinism in any form.  In 2014, when many Russian “leftists” actually became the Kremlin’s singers, supporting Putin’s aggression against Ukraine, the open war of Russian imperialism, which has been going on for the eight years, Igor was not afraid to openly condemn this bloody adventure of the Kremlin.

On 16 September, he was detained in Tomsk on charges of inciting riots through the Chto Delat chat group, and two days later the court ordered his arrest for two months.

On 29 September, he was transferred from the Tomsk to the Pre-Trial Detention Centre No. 5 in Moscow, known for torturing prisoners.  Authorities accuse Kuznetsov and about 10 other people of administering these chat rooms, which allegedly tried to organise nationwide protests during the September 17-19 parliamentary elections in Russia, the reports said. In a statement delivered to the media by his lawyer, Kuznetsov said that he was a member and administrator of these chat groups “solely as a journalist as part of an editorial assignment for RusNews to obtain exclusive information to cover protests.” He denies coordinating any protests. If Kuznetsov is found guilty of inciting riot, he faces a fine of up to 700,000 rubles ($ 9,650), up to five years of forced labour, or five to ten years in prison under the Russian Criminal Code.

Stockholm, October 4, 2021 – Russian authorities should immediately release journalist Igor Kuznetsov and drop all charges against him, the Committee to Protect Journalists said today.

On September 16, police in Tomsk, in western Siberia, arrested Kuznetsov, a local freelance correspondent for the independent news outlet RusNews, and searched his home, where they confiscated three phones and a laptop, according to news reports.

Authorities questioned Kuznetsov at the Counter-Extremism Center in Tomsk, charged him with inducing or recruiting people to commit mass disturbances in group chats on the messaging app Telegram, and the Kirovsky District Court in Tomsk ordered him to be detained until November 14, news reports said.

Authorities accuse Kuznetsov and about 10 others of running those chats, which allegedly attempted to organize nationwide protests during Russia’s September 17-19 parliamentary elections, those reports stated. In a statement passed to media outlets by his lawyer, Kuznetsov said he was a member and administrator of those chat groups “exclusively as a journalist as part of an editorial assignment from RusNews, with the aim of obtaining exclusive information to cover protest events.” He denied coordinating any protests.

If convicted of inciting mass disturbances, Kuznetsov could face a fine of up to 700,000 rubles (US$9,650), up to five years of forced labor, or five to ten years in prison under Russia’s criminal code.

“If journalist Igor Kuznetsov has truly committed an offense, then Russian authorities should immediately provide his lawyers with information about the specific actions he allegedly committed or else let him go,” said Gulnoza Said, CPJ’s Europe and Central Asia program coordinator, in New York. “Russian authorities all too often charge journalists with crimes connected to the protests they are covering. This is a crude form of censorship that needs to stop at once.”

On September 29, RusNews reported that Kuznetsov had been transferred from Tomsk to Pre-Trial Detention Center No. 5 in Moscow and placed in a two-week COVID isolation, preventing his lawyer from seeing him.

Investigators accuse Kuznetsov of helping run a network of chat groups titled Chto-Delat’! (What is to be done!), according to media reports. On the day of his arrest, the Investigative Committee of Russia, the country’s main federal investigating authority, released a statement accusing the groups’ alleged founder and at least 10 other people of carrying out “agitational work aimed at organizing mass unrest” during the elections and publishing videos containing “incitements to violent actions.”

An analysis of the chat groups’ content by independent human rights news website OVD-Info concluded that participants aimed to organize non-violent acts of civil disobedience. Experts who spoke to business daily Kommersant alleged that the channel may have been created or infiltrated by Russian security services to entrap activists.

Yulia Kopeikina, a lawyer representing Kuznetsov, told reporters that the charges against Kuznetsov contained no information about any specific statements the journalist is alleged to have made. She said that Kuznetsov had been an administrator of the group because all members were treated as administrators, and he had not written anything in the chat.

CPJ was unable to identify an account in the chat groups that was connected to the journalist.

When CPJ contacted Kopeikina via messaging app for comment, she said that she was no longer representing Kuznetsov, following his transfer to Moscow. CPJ was unable to determine the identity of Kuznetsov’s new lawyer.

RusNews specializes in video coverage of protests, and operates primarily on YouTube, where it has about 168,000 followers. Kuznetsov began working for RusNews as a part-time correspondent in January 2021, the outlet’s editor Sergei Aynbinder told CPJ in a phone interview. His main work involved filming protests in support of Russian opposition leader Alexei Navalny, Aynbinder said, adding that the outlet had contracted Kuznetsov to monitor any events of interest in his region.

A number of the outlet’s journalists, including Kuznetsov, have been arrested while covering demonstrations, according to Aynbinder and previous CPJ reporting.

CPJ emailed the Russian Investigative Committee and Interior Ministry for comment, but did not receive any replies.

Separately, on September 15, police in Moscow briefly detained RusNews journalist Yevgeny Yevsyukov while filming a protest on Red Square calling for Navalny’s release; he was later fined 20,000 rubles (US$275) for violating regulations on the holding of demonstrations, according to news reports.

The Committee to Protect Journalists