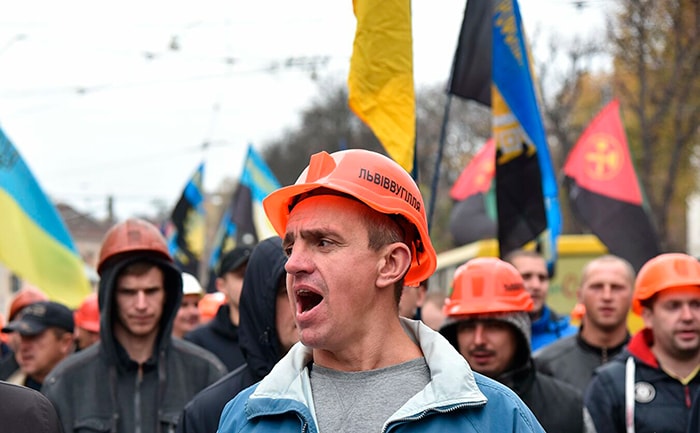 Ukrainian trade unions under the guillotine

The labour market will get rid of trade unions

Under the slogan of getting rid of old Soviet junk, Ukrainian parliamentarians want to “reform trade unions”. This reform guillotine will decapitate trade union committees, which presently force management thoroughly to deliberate over their decisions. After the unsuccessful attempt to pass the liberal law “On labour”, business circles are hoping for a “Plan B” – that the parliament approves a draft Law No. 2681, which would regulate trade union activities in a new way. This “mild labour reform” could destroy the remnants of protection for Ukrainian workers, taking away not the privileges of the trade union leaders (as the law claims) but the rights and wages of the rank and file.

Ukrainian trade unions have a relatively wide range of rights. The Soviet legal inheritance first underwent transformation in the 1990s: The protection of ordinary trade union members decreased, but members of trade union committees continued to have immunity from dismissal, and could to exercise control over the compliance with the labour code. But the legal protection guarantees remain weak because of the weak judicial system and the weakness of trade unions in negotiations with management and organisation of strikes.

Changes long awaited by the bosses

What is in the draft law No. 2681? It not only destroys the “soviet” Labour Code of Ukraine (Code) but also the post-independence Law “On professional associations, their rights and guarantees” (Law).

* The Code would be supplemented by article 247-1, which stipulates the establishment of trade union “control commissions”, whose function would be to oversee the fulfilment of agreements. This instrument would enable employer to weaken the workers’ organisation and complicate its activities with additional bureaucratic procedures.

It gets rid of the union committee’s right to demand that business owners[GS1]  repeal any agreement with management, if it contravenes labour legislation (amendment to article 247 of the Code).

* Changes to article 252 of the Labour Code (powers of trade union committee):

* Changes to article 248 of the Labour Code (guarantees of trade union activity):

* There will no longer be any payment of expenses by businesses, establishments, and organisations to trade union organisations for the cultural, sporting, and recreational activities.

* It will be impossible to verify the balances of business accounts where there are cases of wage delays (according to the authors of the draft law, the current article 251 of the Labour Code is not compliant with the principle of banking secrecy). We can also forget about protection against dismissal of elected trade union committee members one year following their term in office.

* Other changes to the trade unions Law:

The issue of immunity of trade union leaders from being dismissed deserves particular attention. Currently the dismissal of a local trade union committee member must be approved by that trade union organisation as well as acceded to by a higher elected trade union body. An analysis of the European experience shows that such immunity has been preserved in modified forms:

The question of property

The issue which is really provoking meaningful discussions is the nationalisation of property. Naturally the government is counting on splitting the union movement, relying on those trade union organisations that do not have inherited property from Soviet times.

The penultimate provisions of the Law would be  supplemented by point 2.1: “the property of trade unions, their associations under the former Ukrainian and Soviet Socialist Republics, established on the territory of Ukraine and which on 24 September 1991 was in their possession, regulation and usage, become state property.”  This norm is disputable from at least the legal standpoint, since the question of ownership is regulated by the Civil Code of Ukraine. In addition, the Law contradicts the Constitutional provision for laws to be retroactive: the existing property was long ago legalised as the private property of trade unions. As we now see, the right to private ownership has been transformed into a declaration, when the interests of capital demand it. To take away property, to be privatised by the financial-industrial oligarchs, this should only be done through a court. Let us be reminded that in order to protect the interests of modern privatisers, the idea was put forward to rely exclusively on the jurisdiction of English (!) courts to examine privatisation disputes.

“The government is counting on splitting the trade union movement, by siding with those professional organisations which do not have any property deriving from the Soviet period.”

The fate of such property and the investigation of any misuse should be up to the union members. The democratic control of property has significantly higher legitimacy than the compelled loss of it through a state command.

To count on the transparency of how the property is used after nationalisation under draft law No. 2681 will be complicated. A pratical consequence will be the undermining of trust in the  unions: they will be associated with people who throughout the years had misused this inherited property. The necessity of investigating the abuse and pinpointing the guilt of individuals will fall by the wayside. Moreover it is almost guaranteed that other new additions of the odious draft law will  create conditions in which the ownership will be used without public control. The weak unions will not be able:

This never happened, and yet once again

Draft law no 2681 is not the first attack on unions. Attempts to restrict their rights have taken place systematically. The approval of this law will mean that the power of employers will be the greater side in labour relations. But the authors [of this draft law], on the contrary, are describing the present situation  almost as if there was a dictatorship of the unions. In reality, their influence has already been levelled through the judicial system. Ukrainian courts have recognised many innovations which were dreamt of by employers. The following positions are highlighted:

Currently union rights are under constant pressure. Through audacious instances of ignoring guarantees and even the repression of trade unionists, Ukraine as well as Belarus have the lowest standards in Europe according to the ratings of the International Confederation of Trade Unions (ITUC Global Rights Index – 2019). Even in obvious cases where the rights of trade unionists are concerned, our courts can delay making a fair decision. For example, it was only in 2020 that Tetiana Oliynyk, a driver of the trolleybus from the Kurenivsky depot “Kyivpastrans”, was reemployed. She had lost her job in 2017 despite the fact that she had been in the leadership body of the organisation.

The removal of members of union committees’ “untouchability” will be the beginning of losing their protection. Then the model of social-labour relations will be similar to the adored one of neo-liberal America. But of course, without their scrupulous courts.

This initiative has not been taken to punish “bad trade unions”. Its goal is to tie the hands of active unions which can oppose the decrease in medical staff, railway workers or minders. It is precisely in these branches that the government wishes to hound out the unions, so that they can stop opposing the wave of neo-liberal reforms.

The authors in the explanatory notes have written that they consider it necessary to get rid of the “irresponsible” recognition of the unions: “ The development of digital technology and the accessibility of a legal basis, the openness of court practice registers and others, the wide range of advocates and lawyers —  allow for swift and effective protection against violations of  workers rights.” This is laughable coming from a state which is in 72nd place on the rule of law (WJP Rule of Law Index – 2019), worse than all other countries of the European Union and even some of the poorest African countries (Malawi). By pitting workers against “bad” unions, citizens are in fact losing a choice. The defence of numerous rights exclusively through the courts will eliminate the possibility of taking non-judicial routes, linked to the union’s status.

In fact the goal of this draft law is to make the labour market more flexible. Investigators are differentiating between “legal” flexibility of regulations and the “reality”. Because unions have insufficiently made use of legal opportunities, employers have often been able to operate with complete liberty. The opportunity to dismiss workers or to cut wages in response to economic shocks – has become a reality under coronavirus.

The abolition of legal guarantees will lead to an ever greater imbalance in labour relations not only in individual enterprises but also in society as a whole. In the Baltic countries the limiting of union recognition led to a decrease in union membership.

Regardless of the harmonisation of labour rights in these countries with the laws of the European Union, in practice workers have found themselves unprotected. What is true is that in the Baltic countries the harsh reforms with the aim of attracting investment came after they gained European union membership. This perspective for us still remains illusory.

“The aim of this draft law is to make the labour market more flexible.”

Ukrainian capitalism has somehow to get through the next autumn.  No one will increase the suffering/pain of figures on be the Forbes list, that’s clear. Workers will have to pay for even the smallest accounting mistakes of the owners. Their fate is almost sealed because of the lack of political forces who can defend workers’ rights.

So maybe the idea of a trade union is not such a bad idea?