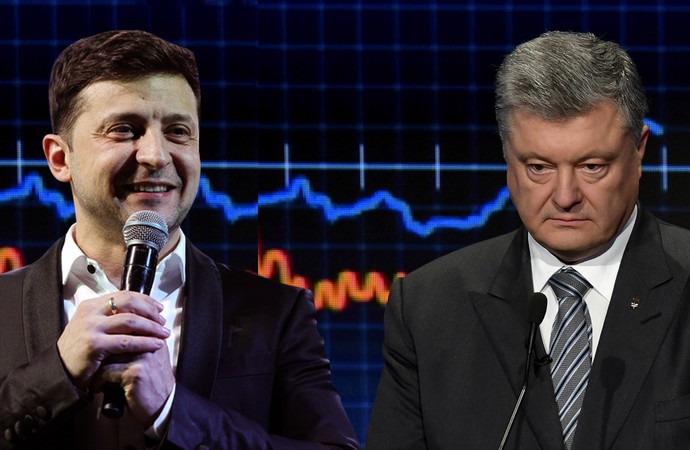 Analysis of the Ukrainian Social Democracy

The Ukrainian comedian Volodymyr Zelensky has won a run-off election to become the country’s next president by a landslide, exit polls suggest. Sitting president president Petro Poroshenko has already conceded defeat.  Ukraine now faces a new reality and the biggest turning point since the popular rebellion EuroMaidan toppled the pro-Russian President Yanukovych in 2014.

Published below is an analysis of these events written after the first round by Olena Skomoroshchenko, International Secretary of the Social Democratic Party of Ukraine
( http://sdpu.in.ua/ )

A situation of choice without choice

The results of the 1st round of elections have left everyone stunned.  The second round has been reached by a non-politician showman Volodymyr Zelensky with 30.24% and current President Poroshenko with 15.95% – these results were indicated by sociological polls.

Why is everyone in shock? Because what has transpired is a collapse of a number of rock-solid stereotypes on which expectations had been based.

Stereotype №1. Ukraine is an underdeveloped post-soviet colony, which can be successfully manipulated.

Stereotype №2. The people of post-soviet countries are not a subject that can influence anything. And so they have to be controlled externally for their own good. Managed through local dirty, corrupt and autocratic elites. This is done to ensure control of the situation and the implementation of external  control.

Stereotype №3. The oligarchic system of these local dirty elites will last forever and nothing is able to destabilize it. There is no alternative. We have to work with it.

Stereotype №4. In underdeveloped countries elections are decided by political technology and money, which are only available to local corrupt elites.

Stereotype №5. Everything that happens in Ukraine depends on the person who won the presidential election. Furthermore the results of parliamentary and local elections and the entire foreign and domestic policy of the country depend exclusively on the president himself.

Stereotype №6. In the modern age – when everything is decided by manipulation – democracy is only decorative, a ritual; that’s why it is safe for the ruling elites. They are not threatened by anything.

It was a unique election campaign, in which there was everything except a choice. Therefore, the main subject was not about one of the candidates, as usual. But about the people who made their choice. The choice is not for Zelenskyi; instead it is a protest against the oligarchic system. The people decided against the existence of the oligarchic system and demonstrated their strength. Manipulation and political technology did not work.

There were three categories of candidates. The major one consisted of 8 representatives of the main oligarchic groups. The second and the largest category consisted of slavish candidates of these oligarchic structures, whose task was to influence the itinerary/schedule of the main candidates. Their main purpose was to  discredit  ideologies in order that the non-ideological oligarchic representatives would  be accepted by society as leading political actors. And, as a bonus, ideological democratic parties have really been discredited. And the third insignificant category was of “crazy locals”.

As was expected votes were received only by the main oligarchic candidates:

All other candidates received less than 1%. The slavish candidates that had discredited social democracy at this election scored less than statistical zero, which in our electoral tradition is 0.3%. Kiva – 0.03%, Kaplin – 0.07%.

Preliminary conclusions before the second round. This is the first election in our newest history in which manipulation did not work. Regardless of the sophistication and over-technological campaign and its lack of content, the result was not affected. The main thing that determined the result was the people’s maturity and spirit to put an end to the oligarchic system. It turned out to be unexpected and grandiose, and it produced an atmosphere of shock.

The second great thing – money, which has always been the main factor in our elections, has shown its insignificance. It is difficult even  theoretically to calculate how many billions have been spent on the campaign by Poroshenko, while Zelenskyi’s campaign was purely voluntary and the number of billboards were in favor of Poroshenko. Money and advertising are not decisive factors now. The decisive factor is the will of the people. And the election will be won only by the candidate who can realize the people’s will.

Thirdly, another grandiose thing is democracy and in our era it is a powerful effective tool that cannot be neutralized by manipulation.

Fourthly, and also unusually – the president’s personality does not have the “leader’s” meaning that it once had and which is inherent in an oligarchic system. Poroshenko’s slogan “There is only one President”,  meaning he is the only one [who can be president], is already being perceived as humorous.

Therefore, it is easy to predict the results of the second round if one adds the votes for Zelenskyi, to those of the “socially relative” Boyko (11.67%) and Vilkul (4.15%), then he is at least expecting a result of 46.06% and that is without considering other voters, such as those of Lyashko and other small candidates. At the same time, votes for Tymoshenko, Hrytsenko and Smeshko will not be added to Poroshenko. Or maybe just some of them will. Well, even if half of them – 7% from Tymoshenko, 3.5% from Hrytsenko and 3% from Smeshko, were added to his own votes amounting to 15.95% plus the 13.5%, his maximum expected result could be 29.45%. If nothing radical happens, like in 2001 in Spain the explosion at the Madrid subway 6 days before the election which resulted in Zapatero being elected instead of Rajoy. But let’s hope that nothing will happen.

But now he may have to be President – this  adds to the shock.