UKRAINIAN MINERS: BRIEFING ON THE CURRENT SITUATION IN PARLIAMENT 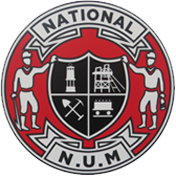 The Ukraine Solidarity Campaign held a successful briefing on the current situation in Ukraine in Parliament on Tuesday 24th October hosted by Shadow Chancellor John McDonnell.

The key speaker was Sergey Yunak, President of territorial section of the Trade Union of Coal Industry Workers of Ukraine (prupu.org) in the Western Donbas region. Sergey represents 20,000 members, and was part of a delegation of miners from the industrial city of Pavlograd organised by the National Union of Mineworkers.

Sergey spoke on the overall situation in the mining industry, highlighting the disparities in wages and conditions across the state and private sectors. There would appear to be concerted efforts to run down the state owned mines in Ukraine. Whilst effective collective bargaining was illustrated in some companies, in others miners were fighting over months of unpaid wages. As regards the oligarch President Poroshenko he said

“The President does not want to invest in coal. He would rather see state-owned coal industry close and throw thousands of miners out of work. He would happily import coal from abroad.”

They compared their situation to the same threat faced by NUM from Thatcher in the UK in the 1980s.

Sergey was asked about Russian language and discrimination, which was viewed by all the delegation as a non-issue: ‘We speak Russian but we are all Ukrainians’ – it was pointed out people generally could speak Ukrainian and also Russian. Many of their Russian-speaking members had volunteered for Ukrainian forces to oppose what they saw as an attack on Ukraine by Russia. In their region they had helped build defences when it seemed a Russian offensive would seek to take their territory. Many had died in the war.

Asked about the union organization in the ‘occupied areas’ now separated from Ukraine, it was said they had all been destroyed and replaced. Serge did not accept the argument people wanted to be detached from Ukraine, “They don’t like it but they have to put up with it. If they cause problems it could be very bad from them.” Serhey was skeptical of the Minsk peace agreement, saying it was an opportunity for Russia President Putin and Belarus President Lukashenko to grandstand. However it seemed unlikely just now there would be major escalation. Sergey highlighted that in these ‘occupied areas’ mines were still owned by the same oligarchs (based in Ukraine) and coal was transported through Russia and back to Ukraine and sold at extortionate prices .

Sergey also spoke of the overall situation in Ukraine, there was degree of exhaustion in society since EuroMaidan and the war, Politically the country is still run by oligarchs. Despite promised reforms, corruption remains a major problem in the state. He was asked about why a Labour Party was not founded – and it was explained that the Federation of Trade Unions had been discussing founding one – he pointed out that they cooperated with some Social Democrats.

A key focus of trade union campaigning is against a new Labour Code which is being introduced. This retrogressive law will give extensive power to employers to hire and fire workers, transfer them between employers, to dismiss pregnant woman and even abolish the extra holidays for victims for the Chornobyl disaster. It poses a serious threat to union recognition and collective bargaining. Both union federations FPU and KVPU are working jointly to oppose the Labour Code. John McDonnell called for solidarity with the Ukrainian union protests and gave examples of the successful campaign with the miners against the company EVRAZ he supported. The miners all highlighted the need to publicise the situation of Ukraine’s trade unions more in the UK. 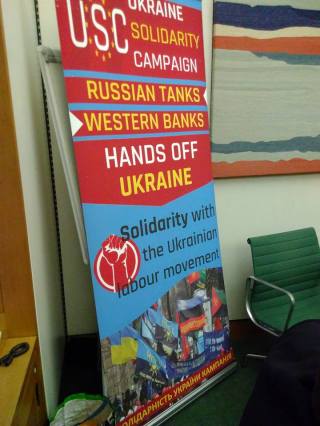 The delegation has also visited Wales and met with the leaders of Labour in the National Assembly of Wales where they were warmly received.

The briefing was a refreshing insight to the situation in Ukraine from a union perspective. A number of myths that have been peddled in our own Labour movement by neo-Stalinists were simply non-existent concerns, whilst real concerns of workers clearly need solidarity.

Socialists in the UK need to listen to the Ukrainian labour movement, not Putin and his regime propagandists. Chris Kitchens, General Secretary of the NUM, and a number of NEC members joined a range of other union officers and representatives. There were also a number of Ukrainian socialists who live in England present.

The Ukraine Solidarity Campaign is supporters include the NUM, ASLEF, Labour Representation Committee and a range of socialist organisations.

The Ukraine Solidarity Campaign seeks to build solidarity and provide information in support of Ukrainian socialists and trade unionists, campaigning for working class, and democratic rights, against imperialist intervention and national chauvinism. Its Basic aims are:

• to support and build direct links with the independent socialists and the labour movement in Ukraine.

Find out more at: ukrainesolidaritycampaign.org