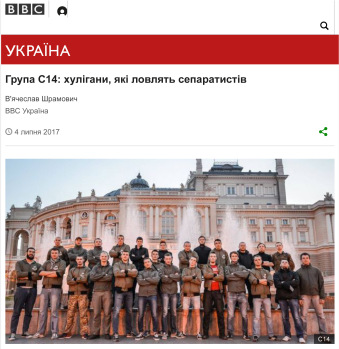 John Cryer MP, the Chair of the Parliamentary Labour Party has joined calls for action against the far-right terror group C14 active in Kyiv, Ukraine. 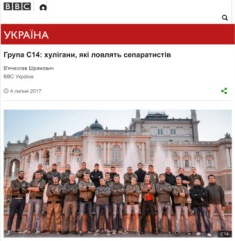 In an Early Day Motion submitted to the UK Parliament has called the BBC to account for its appalling reporting of the C14 terror group that have given legitimacy to its campaign of hate crimes.

The Early day motion Reporting on Ukraine 462 by the BBC declares:

That this House is deeply concerned by the reporting by the BBC of the Kiev-based organisation C14, a far right organisation with neo-Nazi origins; considers the reporting of C14 activities fails to uphold BBC editorial values; is further concerned that the BBC has afforded a degree of legitimacy to C14, allowing it to disguise itself as a nationalist organisation engaged in reasonable activities designed to defend Ukrainian sovereignty; believes that the BBC has failed to apply due rigour in failing to report on the known history of violence by C14, including attacks on the LGBT community, violence against ethnic minorities, journalists and trade unionists and an attack on a police officer using a grenade during Kiev Pride; expresses deep concern at reporting of C14 activities as educational conversation and petty hooliganism; and calls on the BBC to uphold the values and standards expected by licence fee payers in the reporting on Ukraine.

Ukraine Solidarity Campaign has never joined Putin propaganda with it’s hysterical and exaggerated reports of Ukraine being run by a ‘fascist Junta’ – but that does not mean the far right is not a serious and violent problem in Ukraine.

Ukraine Solidarity Campaign appeals to our affiliates and supporters to lobby MPs  to support the Early Day Motion.  The shocking actions of the BBC would not be tolerated when reporting events in any other Western country.  Recently they reported on the arrest of a member of the English far-right group, National Action, charged with encouragement to commit murder.  Yet C14 in Ukraine are exactly the same but given encouragement by the BBC reporting which they are openly citing as justifying their activities. 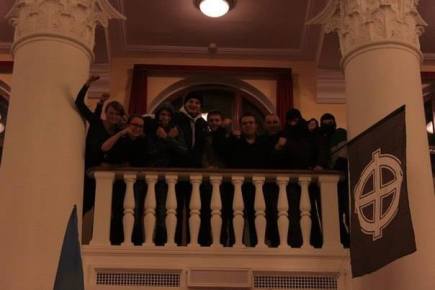 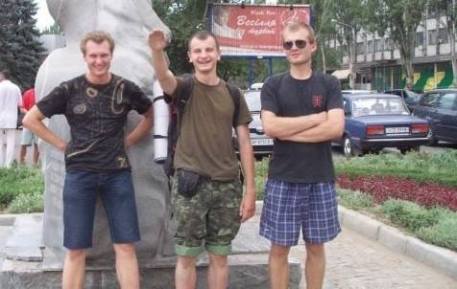 Above C14 Neo- Nazis, their leader Karas is centre.  Below their image today 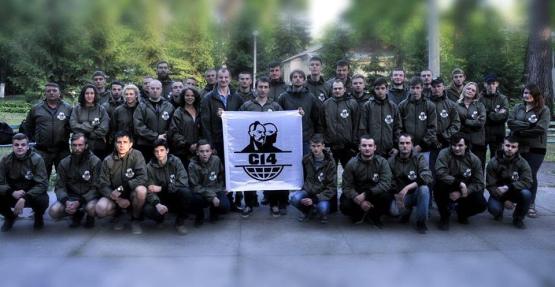 C14 are openly targeting individuals on social media and being given open publicity as if their violence is a legitimate political activity.

Recently the social activist and young historian Maksym Kazakov was targeted by the leader of the terrorist group Yevgeny Karas on Ukraine’s popular news site   Censor Net   the account was a call to violence and based on lies and distortions. Maksym was himself active during the EuroMaidan and previously the Orange Revolution.

We publish a full reply by Maksym Kazakov below:

C14 is Ukrainian neo-Nazi organization specializing in violence against political opponents. In doing this, C14 attracts subcultural youth with its far right symbols; however, C14 is more cautious in this respect than, for example, the far right Azov organization. C14 tries to maintain its respectability in the eyes of the liberal public, business persons, and state officials of non-Ukrainian origin. Therefore, the leaders of C14 are particularly vulnerable to stripping away their extreme right symbols encoded in the image of these “drastic patriots.”

On October 27, Yevhen Karas, leader of C14, gave an interview for Hromadske Radio. The very fact of hosting in a TV studio a far right militant, who after several months spent in the zone of anti-terrorist operation pushed the “fight against separatism” forward into the rear, is appalling.  I have posted a comment on the Facebook page of Hromadske Radio, pointing to the meaning of “14” in the name of this organization (the so-called 14 words of the American neo-Nazi David Lane “We must secure the existence of our people and a future for white children” – the international slogan of the white nationalists and supremacists). Karas responded with hysterical comments, involving threats and intimidation. Literally, in a couple of hours he wrote a libel about me, which he published in his blog on Censor.net.ua, Ukraine’s popular news site.

Since C14 poses itself as a fighter for the independence and integrity of Ukraine, Karas tried to portray me as an enemy of Ukrainian statehood. However, Karas found it hard to establish evidence-based arguments simply because they do not exist.

I began my political activism when graduating from school in Donbas, eastern Ukraine. I supported Yushchenko during the Orange Revolution in 2004, while the eastern part of the country majorly strongly opposed this politician.  I was an active participant of EuroMaidan, and my actions were motivated by all-democratic reasons. Trying to portray me as a separatist, Karas has pieced lies with facts together; it would not cause resentment to anyone except the extreme nationalists.

In the end, Karas wrote poorly disguised calls for physical violence against me. His arguments are simply ridiculous, but the C14 audience is rather uncritical and radical in its actions, so this text might be perceived as a call to action.

I suppose that before writing this libel, Yevhen Karas has not read any of my articles on the history of Ukraine, which are publicly accessible through the Internet. After you read my articles, you will understand that I do not share either Soviet or nationalist ideological constructions.  I deal with the issues of historiography, Orthodox brotherhoods of the late nineteenth and early twentieth centuries, the history of the Ukrainian SSR in 1920-1930, and I work as a volunteer editor of “Commons,” Ukraine’s Socialist magazine.

Neo-Nazis from C14 use to blame their political opponents for Stalinism. They made such hints about me too. Taking into consideration their practicing and propagating the denunciation, reviving the concept of “enemies of the people” and “foreign spies,” politicizing and dogmaticizing the historical past, they themselves are very close to Stalinism. In this case, they cover the desire to punish their critics and opponents under the guise of fight against “the enemies from within.”