The Ukraine Solidarity Campaign condemns the decision of the District Administrative Court of Kyiv on 16th December 2015 to suspend the activities of the Communist Party of Ukraine (CPU). This judgement in effect prevents the CPU from participating in elections and engaging in other activities under its own name. On 25th January 2016, the Supreme Administrative Court of Ukraine upheld the judgement, which is now being challenged at the European Court of Human Rights.
The District court judgement considered that the CPU had failed to conform with the controversial law “On the condemnation of Communist and National Socialist (Nazi) totalitarian regimes in Ukraine and prohibition of promoting their symbols”. An earlier judgement on 23rd July 2015 de-registered the CPU, which prevented it from standing in   local elections under its name.  The CPU then stood under the name of ‘New State’ in the elections.

We oppose the ban on the CPU not out of support for its reactionary, nationalist politics but in the interests of freedom and democracy in Ukraine itself. We share the concerns of human rights organisations that have strongly criticised both the judgement and the law upon which it was based.

Amnesty International has condemned it as a betrayal of the aspirations of the EuroMaidan rebellion, John Dalhuisen, Director for Europe stating: “Expressing your opinion without fear of prosecution, particularly if that opinion is contrary to the views held by those in position of power, was one of the principles behind the EuroMaidan protests. Snuffing out the Communist party flies in the face of these ideals.” Whilst Volodymyr Yavorsky, of the Ukrainian Helsinki Human Rights Union condemned it as contravening the European Convention on Human Rights.  Halya Coynash of the Kharkiv Human Rights Protection Group also condemned the court in backing the Justice Ministry, noting: “It may well be that the SBU [Security Service] can prove that there is a need in democratic Ukraine to ban the Communist Party on the grounds of danger to national security. Neither it nor the Justice Ministry have thus far done so.” The Council of Europe’s Venice Commission has slammed the law on propaganda of communist and Nazi regimes for failings which could infringe people’s right to freedom of expression and of association. Despite meeting the Ukrainian authorities, to date there has been are no changes in the ‘de-communisation’ laws or their application.

Whilst opposing the ban on the CPU, the Ukraine Solidarity Campaign disassociates itself from a campaign in the UK which aligns itself directly with the reactionary politics of the CPU. This does not help the Ukrainian labour movement, democratic socialists or human rights in Ukraine.

It is a fact that first restrictions on the CPU took place in the area controlled by the Russian client Donetsk Peoples Republic. Despite its loyalty to the regime, it excluded the local CPU, rebranded as ‘Communist Party of the Donetsk Peoples Republic’, from taking part in elections in October 2014 and again in October 2015.  It is revealing that the neo-Stalinist parties in the UK have been silent about this ban by authorities that they defend.

That there has been no popular upsurge in defence of the CPU is something that cannot be explained simply by the presence of far-right organisations or embellished accounts of repression. It is true that war in parts of the East and annexation of Crimea, has damaged its main base of support. However it is a fact that for a great many Ukrainians, including trade unionists and socialists, the CPU is utterly discredited.  Support for the CPU was plummeting long before the war. In the last Parliamentary elections before the EuroMaidan the CPU won no MPs in single member districts, dropping to 13.2% of the proportional vote, whilst CPU leader Petro Symonenko dropped to 3.5% in the 2010 Presidential election.  This reality reinforces our view that it is for the Ukrainian people to judge the record of the CPU not the courts

Contrary to what is being presented by some organisations in the West, the CPU has not historically defended working people from attacks. More than anyone, it has been the trade union movement that has defended workers, whilst the CPU has had negligible involvement with unions and social movements.

Despite its rhetoric of opposing all oligarchs, the CPU has been part of the corrupt system of the oligarchic parties and aligned itself with the conservative Party of Regions, acting as servile coalition partner and supporter of these gangster capitalists. Party leader for 23 years, Symonenko is notorious for his Kyiv mansion worth $1.5 million, whilst multi-millionaire Oksana Kaletnyk was a member of the CPU Parliamentary group along with her cousin, millionaire Ihor Kaletnyk. When Ukraine saw mass protests to defend free education, MPs of the CPU such as Kateryna Samoylyk actively opposed the students.

CPU politics blend nostalgia for the ‘stability’ of the strong state under Stalin and Brezhnev with social conservatism, similar to Europe’s right-wing populist parties. It is pro-death penalty, homophobic, preaches Russian nationalism and pan-Slavism, spreads Islamophobia in Crimea while “defending the rights of canonical Orthodoxy” of the Moscow Patriarchy. The CPU it is allied with Russian chauvinists and fascist organisations. In recent elections the CPU is part of a coalition the so-called ‘Left-Opposition’ and stands in election as the ‘New State’, which were alliances of nationalist and religious conservative groups. In UK terms, the CPU has more in common with UKIP or the DUP than our labour movement.

The CPU’s hypocrisy knows no bounds. On 16th January 2014, the CPU voted for anti-protest laws which included trial in absentia, Internet censorship, severe restrictions to freedom of speech and assembly, including one-year corrective labour for slandering government officials. In a typical Stalinist volte-face, on 22nd February 2014 the CPU Parliamentary group voted with supporters of Maidan to depose President Yanukovych only for Symonenko to denounce Maidan as a ‘coup’ the very next day! After Crimea was annexed, the CPU spoke of the existence of a ‘national-fascist regime’ and ‘junta’ in Ukraine.  This is a narrative which echoes Putin’s propaganda and justification for imperialist aggression, which has sadly seeped into sections of our movement, causing widespread confusion.

The CPU claims to be the “heir of the ideas and traditions” of the former ruling Communist Party of the Ukrainian SSR, which was an extension of the Communist Party of the Soviet Union. The actual accomplishments of the people of Soviet Ukraine should be respected, especially the resistance and the expulsion of the Nazi occupation. But the CPU upholds a falsified history devoid of recognition of Ukraine as an oppressed nation.

In its history Ukraine has been subjugated by rival powers, the object of exploitation and national oppression. Under the Tsarist Empire, Ukrainians suffered discrimination, bans on their language and culture, restrictions, repression and inequality. This legacy of colonialism was not overcome in the USSR but continued in a different form under Stalinism.  Communists and socialists of the revolutionary period who sought the free development of Ukraine were savagely repressed.

The CPU celebrates the Five Year Plans that started in 1929 but as always are silent that it began years of mass terror that saw millions perish, deliberately starved to death in the 1932-33 Holodomor, or killed in purges and gulags. Within the old CPU and wider movement, a whole generation was virtually wiped out by Stalin, The independent Ukrainian Communist Party and the Communist Party of West Ukraine were liquidated.

This terror actually helped clear space for and fuel more reactionary forms of nationalism and fascist forces. For most of the post-war period Ukraine was ruled with an iron hand to contain the deep desire for greater freedom and independence. It is tragic irony that neither the CPU’s falsified history nor the ‘de-communisation’ laws of the Ukrainian government recognise the role of the pioneering Ukrainian Marxist writers and political figures who were persecuted in the USSR.

Does this matter today?

Few people in the West know the historical context of Ukraine today and as our movement responds to events it needs to be studied more seriously. It is worth considering that Lenin himself said: “What Ireland was for England, Ukraine has become for Russia: exploited in the extreme, and getting nothing in return.” Imagine if in Ireland the Labour Party or Communist Party viewed the Irish famine as a fraud, the history of the struggle for freedom and independence entirely shaped by the far-right ‘Blue Shirts’. Yet this is precisely the narrative presented by the CPU and echoed by various Communist Parties. The situation in Ukraine is further complicated by the fact that mass terror was committed in the name of ‘socialism’. The difficulties this legacy has for genuine Ukrainian left politics cannot be underestimated.

But we must also appreciate that most Ukrainians are not antagonistic to progressive social and democratic ideas, to equality and justice at work and in society.  The sentiments of ‘anti-communism’ that can be found are based not in an ingrained fascism within Ukrainian nationalism but experience of a ‘really existing socialism’ that was a totalitarian police state. The crimes of the Nazis and deep respect in society of resistance to the occupation do not change the disdain for Stalinist despotism which ruled them for even longer. Understanding the complexities of this view are important for building genuine solidarity with the Ukrainian labour movement and democratic forces.

But alongside sentiments rooted in the legitimate grievances of the victims of oppression exists a real anti-communism that is opposed to social and democratic change, that of oligarchic politicians and the small but at times prominent far-right. This anti-communism is used as a cover for the erosion of civil liberties and prosecution of neo-liberal policies.

Underpinning the conflict between the Ukrainian state and the CPU (and various splinter parties) is not a mass communist threat but the Russo-Ukraine war. The intervention of Russia into a nation it has historically oppressed has inevitably inflamed nationalism. It is true that the CPU in South-East Ukraine supported Russian-backed proxy forces. However, unlike their counterparts in the UK, the CPU distanced itself from these local organisations, even excluding prominent leaders. Nevertheless, their own Russian chauvinism and alliance with Russian far-right organisations such as Slavic Unity in support of the anti-Maidan movement whilst the war unfolded, presented them as an anti-Ukrainian party, opposing self-determination and the political rights of the Ukrainian people, antagonistic to the very existence of a Ukrainian state.

We appreciate and understand why our friends in the Ukrainian labour movement have divided opinions as regards the judgements against CPU. But we say that the CPU’s loathsome political cocktail of neo-Stalinism and Russian chauvinism cannot be defeated by police methods. They can be combated politically and most effectively by a vibrant labour movement, in a fully democratic Ukraine. Whilst restrictions on the CPU may not impact on the activities of the new left and trade unionists, the ban sets a dangerous precedent. For alongside the more serious threat of the anti-union Labour Code if the ‘de-communisation’ laws are not checked and repealed, they will provide a legal cover for the persecution of labour movement activists in the struggles unfolding in Ukraine.

No doubt the various neo-Stalinists will scream at us that any criticism of the CPU and their supporters is ‘red-baiting’ or ‘supporting fascism’. These are the same people who have done their upmost to close down any informed discussion in our movement of the Ukrainian question with abuse and intimidation. While we condemn the recent judgements against the CPU, we will not stifle political criticism of this reactionary party.

Our solidarity here should first and foremost be with the Ukrainian trade unions and efforts to develop an independent, non-Stalinist left alternative. We must support those struggling in Ukraine with the situation as it really is, rejecting the fictional creations of Putin and Stalinist propaganda. This approach is summarised in our demands: 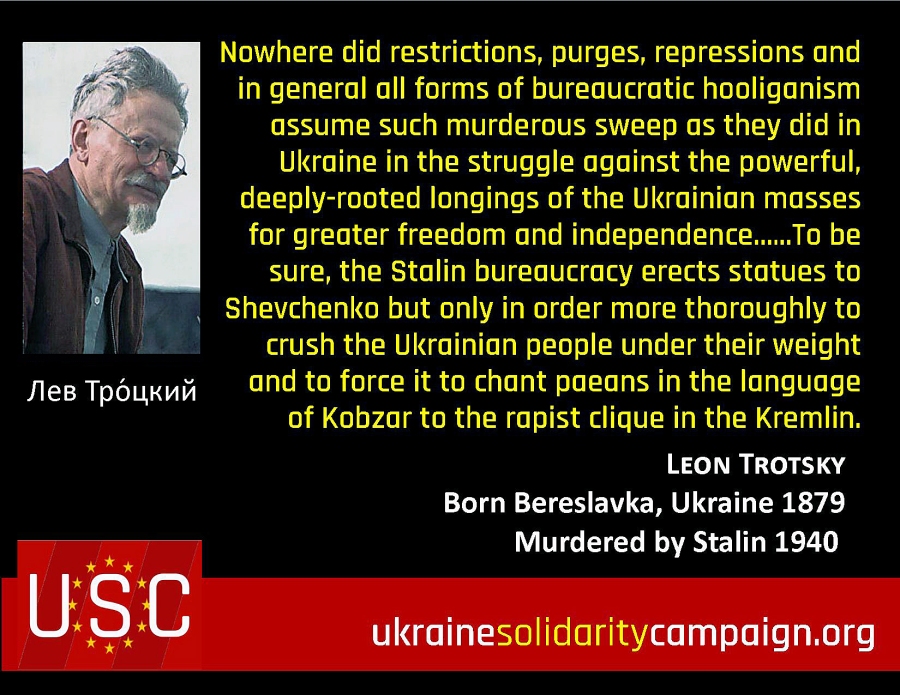 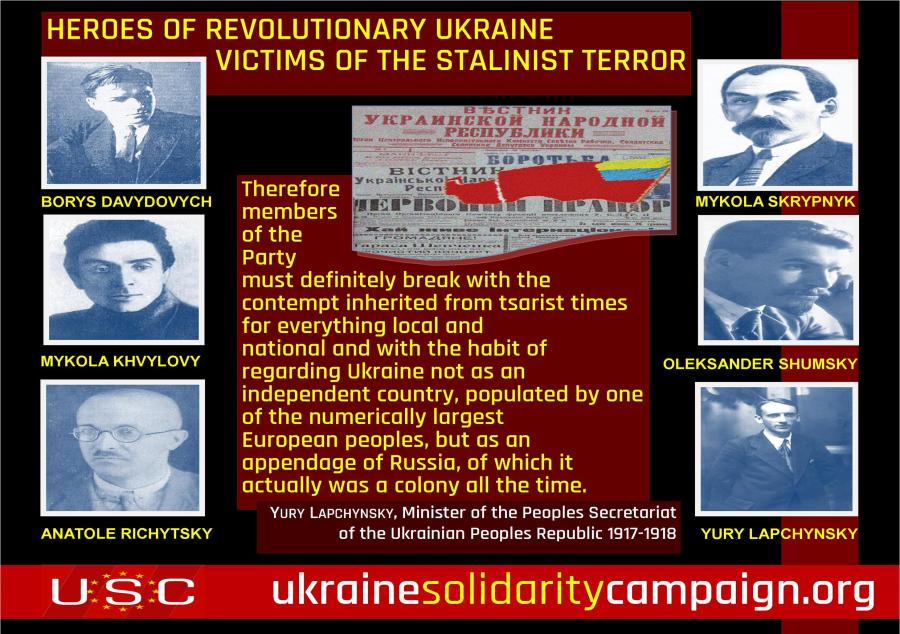