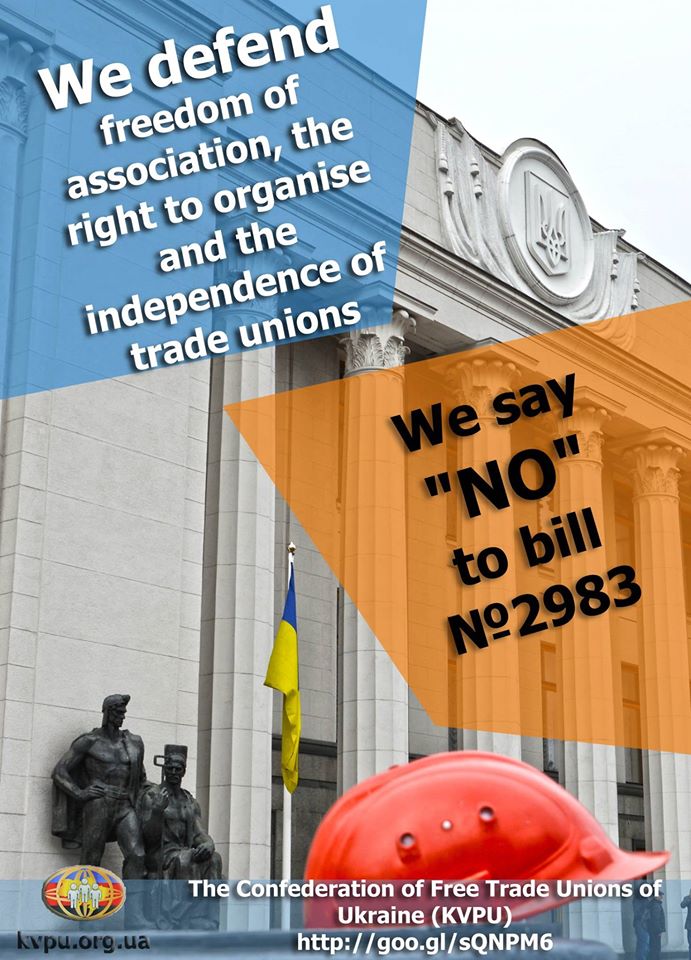 INTERNATIONAL TUC CALLS FOR HALT TO ANTI-UNION LAW IN UKRAINE

The International Trade Union Confederationwhich is represents millions of workers organised in union federations, has written to the Ukrainian government to oppose the new anti-union Labour Code. 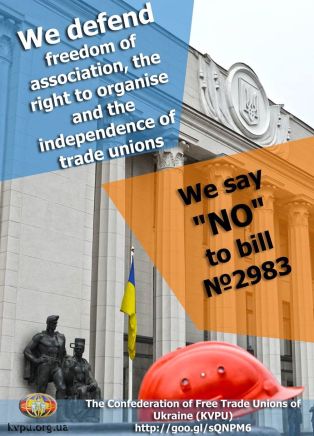 Draft Law No. 2983 “On State Registration of Legal Entities and Individuals –

The International Trade Union Confederation (ITUC), which represents 176 million workers in 162 countries and territories and has 328 national affiliates, is very concerned about draft law No. 2983 “On State Registration of Legal Entities and Individuals – Entrepreneurs and Community Groups”. This draft law was put on the agenda of the Verkhovna Rada of Ukraine and was considered already at a first hearing on 14 July this year.

This law, if adopted, would introduce changes to the existing legislation on trade unions and their activities inconsistent with the relevant international labour standards and the legal obligations of Ukraine. It is difficult to see any reason why this reform is being undertaken, in particular in such a hasty and non-participative manner.

The ITUC affiliated organisations – the Federation of Trade Unions of Ukraine (FPU) and the Confederation of Free Trade Unions of Ukraine (KVPU) – as well as the joint national body of trade unions of Ukraine, strongly protest such draft legislation, as the adoption of the proposed text would weaken the autonomy of trade unions and would deprive them from protection from external interference, including by the public authorities. In particular, it would install a system of authorisation of trade union activities by the means of state registration instead of the notification procedure existing today. That is a clear violation of Article 2 of ILO Convention on Freedom of Association and Protection of the Right to Organise No 87, which defines workers’ right “to establish and, subject only to the rules of the organisation concerned, to join organisations of their own choosing without previous authorisation”. There are other problematic areas in the draft law, including the requirement to provide various and excessive information about the union founders.

We urge you to postpone any discussions about this draft law until a thorough analysis is undertaken to determine whether the provisions of the law are consistent with the international obligations of Ukraine by the competent national authorities and the International Labour Organization. The ITUC and its national affiliates have already requested the ILO to provide its technical assessment of the law. Previously, in various cases, the ILO supervisory bodies havealready denounced the similar trade union registration procedures as a violation of the ILO Convention 87.

The ITUC will continue supporting Ukrainian workers and their unions in the difficult and turbulent situation Ukraine has been experiencing and will use all means available to make sure trade union rights, and in particular freedom of association are fully respected in Ukraine, in law and in practice.