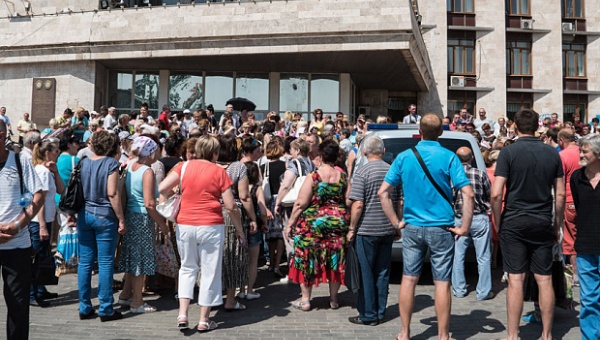 ‘STOP THE WAR’ PROTEST IN DONETSK

An anti-war protest has taken place in the heart of Donetsk.  Unsurprisingly it was not reported on Russia Today or by the Stalinists. 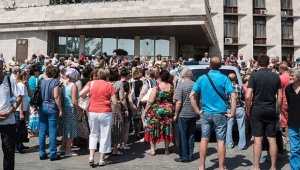 There has been increased fighting in parts of Donetsk and Luhansk Oblasts in Eastern Ukraine.  This has been most notable in the Ukrainian city of Pisky, a city five kilometers from Donetsk held by Russian forces.  The OSCE has criticised the shelling in contravention of the Minsk Agreement which  set a demarcation line where heavy weapons were to be withdrawn.

This escalation has provoked unrest inside the self-styled ‘Donetsk Peoples Republic’ where there has been very little public protest since early 2014.

On 15th June 500 residents of the Oktyabrskoe district of Donetsk took part in a stop the war protest.  The anti-war protesters demanded that the Russian forces should stop shelling and using civilian buildings as cover.  shouting: “Stop the war!”, “Give us back our houses, our homes are broken!”, “Get out of here!”

This was a concern raised on numerous occasions previously including  by the independent miners unions as using buildings in this way was increasing civilian casualties when counter-fire was returned.   The head of the regime in Donetsk – Zalarchenko came out and met the protesters insisting the fighting would continue.

One protester said: “People were lost when we voted for the rebels, but they screwed us, simply screwed us!”

A video with English translation is available here and below: Donetsk Residents Stage Rare Anti-War Protest

Russian journalist Pavel Kanygin, working for Novaya Gazeta, one of Russia’s independent and opposition media, filmed the demonstration.  A day after the anti-war rally, Kanygin was detained and beaten, and deported back to Russia.  There has since been an increased military presence next to the government building where the protest took place.

The video of the protest by Novaya Gazeta is available here:

And with translation in English here: