Solidarnosc Miners’ Statement in Solidarity With the NUM – 1984

On 17 June the Underground Provisional Co-ordinating Committee of Solidarity miners issued an unequivocal statement in solidarity with the British miners in their great struggle for jobs.

The Co-ordinating Committee statement was read out at 10 a.m. on Sunday 17 June by the Solidarity underground radio station in Upper Silesia, Poland’s main coal-mining region.

The statement read as follows:

‘The Underground Provisional Co-ordinating Committee of Solidarity miners vigorously protest against the present policy of the Polish People’s Republic on the management of our major source of wealth — coal. Selling it on foreign markets at competitive prices (ie. at less than world market prices) is first of all a violation of the Jastrzebie Agreements (August 1980) in which it was clearly established that coal is a national resource which must be used rationally. The above-mentioned pricing policy transforms investment in the mines into a straight economic loss.

Thirdly coal distribution and trade is organised outside of any social control. The Polish government has no right to behave like a mine-owner and to dispose of the national wealth as it pleases. Only the damned capitalists and dictators act in this way.

Fourthly, the Polish government’s policy in this field affects the basic-interests of brother miners from other countries who lose their jobs as a result of it.

We hope the Party authorities and parliament — who say they represent the people — explain what is really going on.

To the striking miners of Great Britain: The Underground Provisional Co-ordinating Committee of Solidarity miners sends you fraternal greetings and our support and solidarity for your struggle for the right to work.

We know from our own experience what it means to lose a job. For this reason we will do everything possible to sup­port your struggle, including in action. The protest we have sent to the Polish government and parliament is an initial measure taken in support of your struggle.

From Labour Focus on Eastern Europe, No.2, Summer 1984

The two great movements that have shaken the status quo in Europe in the early 1980s have both now suffered serious setbacks. The independent working class movement in Poland, Solidarity, is now fighting for its continued organisational existence as an underground movement. And the huge peace movement in Western Europe has failed to stop Cruise and Pershing, and despite some victories on the margins – in Holland, Denmark and Greece, is facing a rising tide of militarism.

And perhaps the greatest setback of all has been the failure to develop common positions between the peace movement and the Western Left on the one hand, and the great movement of the Polish workers on the other.

If we are frank we must acknowledge that in the Polish underground — at least if the main journals that reach the West are any guide — there is suspicion of the peace movement and sym­pathy for the policies of the current US administration.. While within the peace movement, and the Left, at least in Britain, there is a good deal of suspicion of Solidarity. (Anyone who doubts this should have tried handing out leaflets about Solidarity political prisoners on the impressive anti-Reagan demonstration in London at the start of June.)

Yet now, at last, two authoritative voices have been raised with statements which, if they were taken up seriously, could help over­come these deep divisions. Both come from Poland.

The first is a blunt and straightforward declaration of solidari­ty with the British miners’ struggle for jobs against the Thatcher government. And it comes from none other than the Underground Provisional Co-ordinating Committee of Solidarity miners in Up­per Silesia, the heartland of the Polish coal industry. We reproduce the statement, issued on the day of Poland’s local elec­tions, 17 June, in this issue of Labour Focus.

This statement is a crushing blow to the arguments of those, including Arthur Scargill, who have said that Solidarity does not operate in the interests of the working class (if only many of the trade union leaders in this country would display a similar sense of solidarity with the miners to that in the Solidarity statement). It is also an embarrassing setback to the efforts of the AFL-CIO and the ICFTU leaders to use their funding of Solidarity represen­tatives abroad to present the rank-and-file Solidarity workers as having something in common with the cynical and often politically corrupt operations of Western international trade-union apparatuses abroad.

The Solidarity miners’ leaders of Upper Silesia have recognised the all too obvious kinship between their struggle for their rights and their dignity and that of the miners in Yorkshire and the other British mining areas. 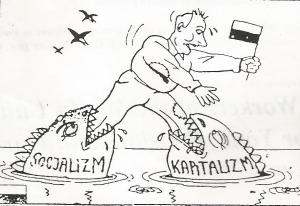 The second statement from Poland comes from Jacek Kuron on hunger strike as we go to press, waiting for his trial to open in Warsaw on 13 July. At the beginning of June, Kuron smuggled a letter out of Mokotow Prison in Warsaw, an open letter to the peace movements of the world.

As yet the full text of this letter — Kuron’s first public appeal of this sort since he was arrested in December 1981 — has not reached the West (despite the fact that it was in the hands of Western press agencies in Warsaw on 6 June!).

But the very brief summary sent over the wires (and reproduced by Uncensored Poland – the indispensable source of reliable news from Poland) says an enormous amount in a few words.  Each phrase is worth taking in turn and pondering:

Let us spell out what this means. Kuron is not just calling for the demilitarisation of Poland and the GDR (including the withdrawal of Soviet troops there). His demand also means the following: running down the Bundeswehr, Europe’s most power­ful army outside the Soviet Union, and the effective withdrawal of the huge American military machine on continental Europe, as well as the removal of the 55,000 British troops there. This would give the USSR strategic superiority in Europe. It would also open up the prospect for popular movements to change the face of Eastern Europe and the USSR itself. This is what Kuron is sug­gesting. And he is right. Only those who grasp this truth along with Kuron are on the side of genuine progress towards lasting peace in Europe and freedom for Poles.

Of course, allowing the Soviet Union a military advantage in Europe will seem absurd to people who overlook the permanent Soviet fear of attack from the West and the ways that has influenc­ed Soviet military policy: insisting on a tight grip on Poland, the GDR and Czechoslovakia, while failing to take over Finland, han­ding back Austria and not overrunning Yugoslavia in 1948-49. While West Germany remains a massive launching pad for poten­tial attack, there is no likelihood that the Russian people will ever feel secure with a Polish nation looking Westwards.

There is a second argument against Kuron’s call for a modern version of the Rapacki plan: it is unrealistic. The Soviet leadership will never accept a political ‘deviation’ by the Poles or the possibility of a united Germany; and the Americans also will not accept Western Europe going its own way and Germany re-united.

This is true enough: ruling circles in Washington and Moscow •would have great political fears about such developments and would resist them. So would their clients in both halves of Europe.

But both the Solidarity miners and Jacek Kuron can given an answer to this: the enormous potential political power of mass working class movements, as we have seen in Poland. And in the West the peace movement has also shown the capacity for action from below. When Kuron first outlined how that power could develop in Poland, back in 1976, he was considered by many to be irresponsible or Utopian. But the ‘realists’ were proved wrong. The British miners are giving us another demonstration of such working-class determination when their vital interests are at stake.

The tragedy behind these two statements from Poland is that Kuron is in jail and the Silesian miners’ leaders are clandestine. It is almost impossible to carry on any dialogue with people in such conditions. We do not even know whether the Western press agen­cies have reported Kuron’s words accurately. And worst of all, these statements get publicity in the West only in magazines with tiny circulations like our own. Immensely powerful forces are at work to silence such voices from Poland long before they reach the ears of the Western peace movement and the Left. We must work to ensure this cannot happen. For a start, we must call for the release of Jacek Kuron and the other political prisoners in Poland. And we must continue to demand the right of the Polish miners and the rest of the Polish working class to organise freely to defend their rights.