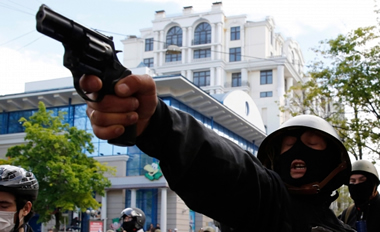 Continuing Obstruction of Odessa May 2 Investigation

Court rejection of a suit demanding access to forensic material connected with the events in Odessa on May 2, 2014 may not be breaking news, but it is yet another frustrating failure to understand the need for openness in this case.  Russian propaganda has from the outset worked to present the disturbances on May 2 and terrible fire in which 42 people lost their lives as a ‘massacre’.  This false narrative can be easily refuted by demonstrating the facts and willingness to present the public with all necessary information.

Two journalists from the May 2 Group, a civic initiative investigating the events on May 2, accordingly sought to get the Odessa Regional Forensic Investigation Bureau to provide the results of their examinations of the bodies of the six people killed in the centre of the city and the 42 people who died as a result of the fire on Kulikovo Pole.  Serhiy Dibrov and Leonid Shtekel had asked the Odessa District Administrative Court to order the Bureau to provide the information.

The court rejected the suit, saying that the issue could not be considered as administrative proceedings.  Since the material is part of a criminal investigation, the court argued, its disclosure must form part of criminal proceedings.

The journalists are planning to appeal against the ruling since the material in question is not in the investigators’ files, but held in the Forensic Investigation Bureau archives.  They argue that the information is of enormous public importance, and that failure to divulge it plays into the hands of those manipulating public opinion and directly damages Ukraine.  In court, Dibrov argued that such unnecessary secrecy is endangering lives.  He cited the claims made by some Spanish nationals detained last week in their country after fighting on the side of the Kremlin-backed militants in eastern Ukraine.  They asserted that they had gone to Ukraine after the events in Odessa on May 2.  A young Russian soldier who suffered horrific injuries while fighting in Ukraine was recently interviewed by a Novaya Gazeta journalist.  Dorzhy Batomankuyev said that he had no regrets and believed he was fighting for the right cause, mentioning as the reason ‘the news’ he saw on TV about events in Ukraine – “people in Odessa were burned to death”.

Dibrov mentions also an attempt in Odessa to blow up a train.  Those who claimed responsibility called themselves the ‘Vadim Papura Unit, after a young man who died in the Trade Union House fire.

The authorities have so far only provided overall numbers of people killed, with other information – including a list of victims – put together by the May 2 Group.

It is impossible not to share Dibrov’s frustration.  The Russian propaganda machine has since the events themselves been flogging the idea that ‘radicals’ caused the disturbances in the centre of Odessa on May 2, 2014 and then chased pro-federalism activists to the Trade Union House and somehow “burned them alive”, even catching and beating to death those who escaped.  A very large amount of money and effort is going into pushing this totally false narrative.

The ‘Odessa massacre’ propaganda is effective because people know very little about the case.  It is therefore vital that the Ukrainian authorities ensure full information, not obstruct it.

The June report from the UN Human Rights Monitoring Mission in Ukraine (HRMMU) outlines the key events, making it quite clear that the violent disturbances in the afternoon were caused by a small group of pro-federalism activists who attacked a peaceful pro-unity rally in the centre of the city.

Six people died of firearm injuries.  Although most of the victims were pro-Ukrainian unity supporters, weapons were used by both sides.

The role of some police officers both during those disturbances and later on Kulikov Pole is of vital importance to the investigation.

There is also footage that seems to indicate that Dmytro Fuchedzhy, ex-deputy head of the Odessa police, helped pro-federalist Vitaly Budko (‘Botsman’) escape.  Botsman can be seen shooting at pro-unity activists in a lot of the video footage.

All of this needs to be investigated adequately for the sake of the victims and their families, but also in fairness to those police officers who conscientiously carried out their duties that day. Many of the latter have since been involved in

There was a pro-federalism tent camp outside the Trade Union building on Kulikovo Pole to which both some pro-Ukrainian and pro-federalism activists began moving.

A majority in the May 2 Group have reached the conclusion that there was some prior agreement between the main groups on each side and the police, but that something went badly wrong.  This would explain, among other things, why the police took so long to react to a situation rapidly getting out of control (more details here).

Whether or not this is the reason that the fire brigade took over 40 minutes to come to the Trade Union building after it began burning also needs careful investigation.  42 people died in the fire or as a result of injuries  sustained in jumping from the burning building.  For this reason, especially in the light of Russian attempts to claim a ‘massacre’, it is critical to understand what went wrong.

They assert that the pro-federalism activists fled inside the Trade Union building from a murderous crowd of pro-unity radicals burning their tents.

It is clear that the tents burned because of Molotov cocktails hurled both by pro-unity activists and by the pro-federalism supporters positioned on the roof of the building.

Although it is most likely the case that the entrance to the building went up in flames because of pro-unity activists throwing Molotov cocktails,  according to Vladislav Balinsky from the May 2 Group, the evidence indicates that some of the pro-federalism activists had prepared well in advance to barricade themselves in and defend the Trade Union building. They had also tricked around 380 people – both supporters and tram passengers – into coming into the building.

An important fact always omitted by the propaganda accounts is that pro-federalism activists were shooting at people from one third floor window and from the roof where they also hurled flares and Molotov cocktails.

Aggression on one side was met with aggression from the other.  There is no evidence at all that anybody was trying to set the building alight or to trap people inside.

There is considerable footage showing pro-unity activists engaged in desperate, sometimes dangerous, efforts to save people trapped in second storey windows.  It is also clear from the reporting that nobody outside had any idea how many people were inside the building (details of corroborating video footage can be found here).

More detail about the events on May 3 can be found here:

Odessa “Massacre” Propaganda vs. the Facts

and Manufacturing international outrage over an Odessa Massacre that never was