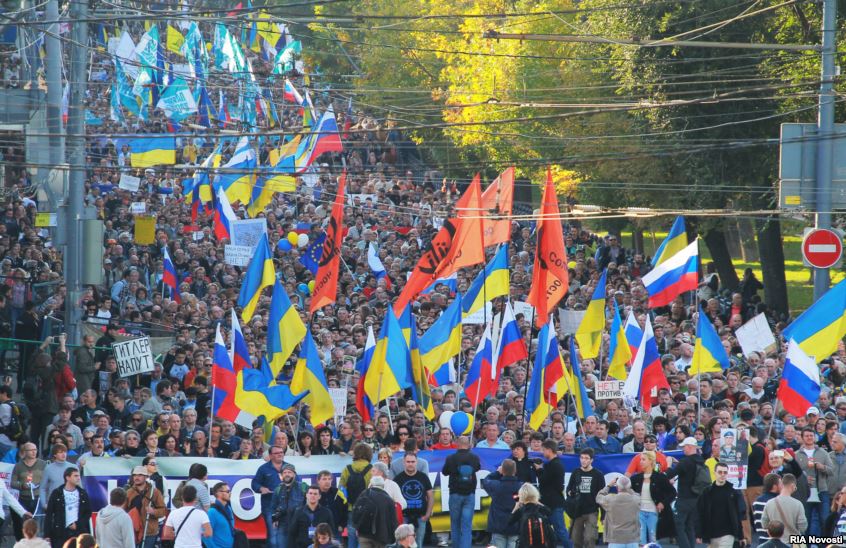 After months in which the Russian authorities have tried to conceal information about Russian soldiers fighting and dying in Ukraine, a Smolensk mother of seven is in detention facing charges of treason for trying to divulge this ‘state secret’.

Svetlana Davydova is in the Lefortovo Prison in Moscow facing charges of state treason in support of Ukraine.  The charges against the Smolensk mother of seven relate to a phone call she made to the Ukrainian embassy in April 2014.  She rang to inform them that the military unit next to her home was deserted, and that the soldiers might have been sent to Donetsk in eastern Ukraine.

The case against Davydova, No. 3/1-10/2015 is recorded here, though the details come from a newspaper article in the normally reliable Kommersant newspaper. Its correspondent was told by Davydova’s husband Anatoly Gorlov that a contingent of men in black camouflage gear turned up at 8.30 on Jan 21, together with a plain-clothed officer who identified himself as an FSB investigator into particularly important cases.  He proceeded to arrest Svetlana Davydova on charges under Article 275 of the Russian criminal code.  She was taken away and a search carried out of the house.  The FSB removed all notebooks, computer and laptop.

She was taken to Moscow immediately and remanded in custody with neither the FSB, nor the judge concerned that Davydova has 7 young children.

What the FSB call ‘state treason’

In April 2014 Davydova noticed that military unit No. 48886 which is normally occupied by the No. 82 Chief Intelligence Unit [GRU] brigade, was virtually empty.  She initially didn’t make anything of it, and went off to Smolensk.  There, however, while travelling in public transport, she heard a military serviceman from the unit talking on the telephone.  During the conversation, he explained that he and the other man were being sent to Moscow in small groups, all in civilian clothes, and then sent further on a work-related trip.

According to Gorlov, his wife was following what was happening in eastern Ukraine and immediately understood that the ‘work-related trip’ could be to Ukraine.  She told Gorlov about the conversation then decided to ring the Ukrainian embassy in Moscow.  A note she made of the call has now been added to the case file.  The call consisted of her telling somebody at the embassy that she had such information and hoped by imparting it to prevent possible deaths.

She did not herself speak with representatives of the embassy, but whoever answered the phone promised that they would bear the information in mind.

So presumably did the FSB who probably intercept phone calls to the embassy.  The FSB have promised to answer Kommersant’s questions within a month.

Kommersant did speak with Anna Stavitskaya, a well-known Russian lawyer who defended, among others, Igor Sutyagin who was sentenced to 15 years for what the FSB called spying even though he published publicly available information about Russia’s nuclear weapons.

Stavitskaya points out that Article 275 which can carry 20-year prison sentences covers the divulgence of a state secret or provision of consultation to another state “directed against Russian Federation security”.  Davydova had no access to state secrets.  Furthermore, “in the course of this case the FSB will have to admit that they are sending soldiers to Ukraine or assert that our neighbour is waging war on us and is supposed to attack.  Whichever case this is likely to place the investigators in an uncomfortable position”.

As intimidation, the charges against Davydova would certainly be effective, yet Stavitskaya is surely right about the effect such revelations would have.  Up till now, the authorities have tried, not very convincingly, to find some other pretext for  repressive measures against civic activists and journalists investigating the ever-increasing number of soldiers being sent to Ukraine to fight, and especially those who were killed or injured.

These have included the dubious criminal case against 73-year-old Ludmila Bogatenkova, the head of a regional Soldiers’ Mothers Committee in Buddyonovsk who was remanded in custody in October.  She was released only when it became clear that her state of health made it likely that she would not survive the detention.

Bogatenkova and her committee had been actively investigating the death of Russian conscripts and contract soldiers in Ukraine.

On Jan 27 a St, Petersburg court rejected the appeal lodged by the Soldiers’ Mothers of St Petersburg NGO against their forced registration as a ‘foreign agent’.  The decision by Russia’s justice ministry was announced in late August, just days after representatives of the NGOs had publicly spoken of soldiers being sent to Ukraine.

A similar probe has recently been initiated against the NGO For Human Rights.