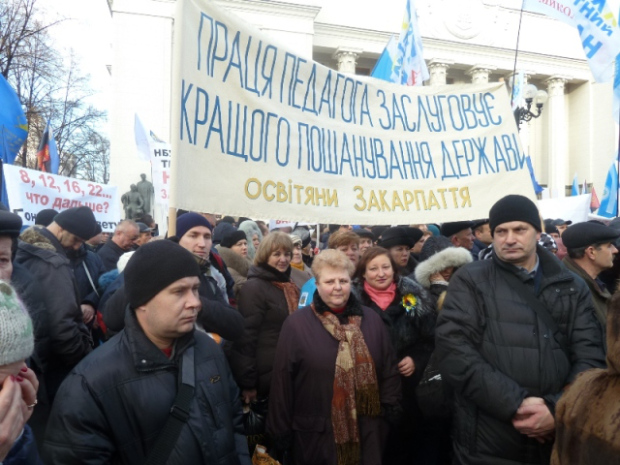 The government and the employers now face growing labour unrest. The most common cause of labour disputes throughout 2014 was the widespread practice of employers to withhold wages from their workers for months on end. While wage arrears continue to grow, protests over this and other issues are now taking to the streets and starting to focus on a broader problem: the coalition government’s austerity programme.

Four demonstrations were mounted in the last two weeks of the year. One thousand teachers and other public sectors workers rallied in Ivano-Frankivsk on 18 December. Over ten thousand workers gathered outside the Cabinet of Ministers in Kyiv on 23 December in a demonstration called by the Federation of Trade Unions. In Novovolynsk hundreds of coal miners held a one day strike on 24 December, demonstrated in the town and blocked the interstate highway. And on 25 December workers at the state gunpowder plant Zirka protested in Kyiv outside the Cabinet building demanding increased security for their workplace and an end to state managers’ efforts to bankrupt the plant and sell its equipment off for scrap.

Meanwhile, Kyiv tram drivers struck twice in December to secure payment of their wages, in arrears since October. They won only part of their back pay. There are many such still unresolved disputes over wage arrears across the country – they are concentrated in the most profitable private enterprises and in public sector occupations. They demonstrate the extent to which workers’ contractual and legal rights are routinely ignored.

The economic and social crisis

The rise in protests comes against the backdrop of a deepening economic crisis and haemorrhaging public finances. The incomes of the tiny middle class, the workers, pensioners and students were decimated in 2014 by inflation (23.9%, the highest since 2000), wage cuts, wage arrears, and a currency devaluation of 50%. The real level of unemployment is far higher than the official figures contend (9%), and would be even higher were it not for the ongoing war, which consumes its own share of working age people. Then there are over 850,000 internally displaced people in the country, many destitute and dependent on relatives and neighbours for their survival.

The 2015 state budget bill (No. 1000) was adopted by the Rada at the very end of last year, then subjected to changes behind the scenes and published finally on 12 January. This is not a strategy to save people from further immiseration, but to balance the books while fighting a costly war and repaying a mountain of foreign debt.

We can measure the true value of the government’s spending targets for 2015 only if the 23.9% inflation rate achieved in 2014 is discounted from the hryvnia-denominated spending projected for 2015. In this way we calculate the real domestic purchasing power of separate lines of the state budget at the beginning of 2015, compared to the beginning of 2014 when that year’s budget began to be spent. When that is done, the figures show the government is planning to make deep real cuts in the funding of education, health care and social welfare. It will also decrease deposits in real terms to the Pension Fund. At the same time spending on defense, law and order and the cost of servicing the state debt will increase sharply.

Kyiv labour lawyer Vitaliy Dudin has identified (http://gaslo.info/?p=5717) a wide range of measures in the state budget bill that will fall heavily on the most vulnerable people. The minimum monthly wage will be frozen at the 2014 level of 1218 UAH (65 Euros) until 1 December 2015 when a handsome 160 UAH will be added to it. Ukrainian workers are already the poorest paid in all Europe.

Public sector employees will no longer have their salaries linked to the consumer price index. Ministers now have the right to alter pay rates and to dismiss workers at their own discretion on the basis of “availability of funding”.

The same criteria of availability of funding will apply to disability benefits for Chernobyl veterans and student stipends.

Moreover, thegovernment plans to curtail the operation of a wide range of social rights that are entenched in 46 separate laws (previously they were curtailed in eight laws). This radical step, which unions say violates the Constitution, will negatively affect, among others:

The government has a broader economic and fiscal strategy front than the measures revealed in the 2015 state budget. It plans to privatise more state enterprises and services on the railways, the coal mines and port facilities (though these plans have been challenged by the Rada in recent days). The government also wants to finally adopt a new Labour Code so as to consolidate the rights of employers to hire and fire and to limit the rights and presence of trade unions in the workplace.

Its long term, strategic objective is to drastically reduce the state’s responsibility for the maintenance and reproduction of labour – that is, through the public institutions of welfare and social security, health and education, as well as the remaining public utilities.

Much of the immediate pressure to offload this responsibility stems from the mounting costs of prosecuting the war in the east. But there is a long term view as well: this pressure is regarded as a positive opportunity for the state to strengthen the direct relationships between labour and capital and with less mediation by the state.

Some Soviet-era arrangements for comprehensive social security still survive in Ukraine, more so perhaps than any anywhere else in the region except Belarus. They stand in the way of the transition to the market in all things, including health, education and security in old age. Moreover, Ukrainian capitalism today needs for its international competitiveness a labour force that is low in cost to the employer and to the state, plus a flexible labour force with minimum rights in law.

Will workers renew the resistance they mounted in December to the government’s current plans? Undoubtedly some workers are more determined than others to do so: the miners and teachers, for example. We will soon see if and how strong the resistance will return. Labour movement activists are pointing to 15 February, when the government will review its implementation of the budget bill, as the target date for their next mobilisation.

But some resistance has already reappeared – the Novovolynsk miners have blocked the interstate highway again on 13 January and sent a delegation to Kyiv to press their case with the government. The leaders of their labour central, the Confederation of Independent Trade Unions, has already announced on 19 December that they are preparing for a strike if the government refuses to engage in serious negotiations over wage arrears and the future of the coal mining industry