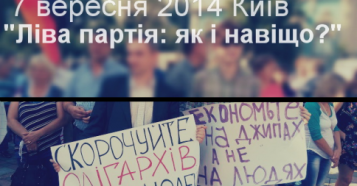 The Ukrainian “new left” discussed the idea of ​​creating a democratic party of labour on the basis of the political party “Socialist Ukraine”.  Following this a Steering Committee was set up

On September 6-7, 2014 a conference “The war in Ukraine and policies of the Left,” was held in the Ukrainian House, supported by the Rosa Luxemburg Foundation. It brought together about 100 participants from across Ukraine and abroad.  It was stated that that the war in the Donbas benefits only the ruling classes and imperialists of the West and East.  Anti-social and anti-democratic changes have been given a new impetus. Social problems continue to be resolved at the expense of the workers.

Stopping the war and extending people’s rights are possible only by the creation of a left-wing political force. Details of such an association were discussed on September 7th in a session devoted to the representation of the workers movement. The political party “Socialist Ukraine” is ready to provide a basis for the consolidation of the workers.  Now, filling this project with revolutionary content depends upon all willing participants from the Left and trade union activists. (Party leader Volodymyr Hoshovsky is prepared to agree to changes in the name, charter and programme, as well as to re-election of the leadership). Also participating in the discussion were representatives of the Independent Trade Union of Miners of Ukraine in Kryvyi Rih.

A draft programme and statute were presented. The programme includes transformations that would help overcome the crisis in Ukraine, as well as reducing the domination of the oligarchs over the political process. The statute is based on the following principles:
– Financial independence (of the party) and a developed internal democracy;
– Full financial transparency (online publication of revenues) and limits to contributions to party funds. Complete financial independence from the oligarchs and businesses;
– Minimising the delegation of authority to the centre, and creation of a collective leadership of the Party;
– taking decisions on all questions by electronic voting;
– Creation of different factions as the guarantee of ideological diversity within an overall socialist and democratic trajectory for the party.

Opinions were expressed that the proposed draft programme is not much more radical than the programme of the Socialist Party, and that the statute – reproduces some atavisms of the Brezhnev era. At the same time, some participants in the discussion said that a party with broad democratic mechanisms will be unable to respond quickly to events.  In turn, the initiators of the organizing committee said that together we can overcome all these problems: to supplement the programme with radical strategic goals, to minimize the influence of central (party) organs and to encourage grassroots activity. 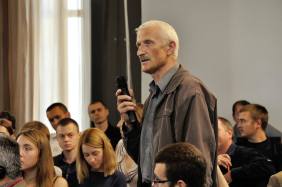 The conference formed an organising committee whose aim is to renew the party “Socialist Ukraine”.  Activists from different cities of Ukraine (Kyiv, Odesa, Dnipropetrovsk, Kharkiv, Kherson, Zhitomir, etc.) have expressed a desire to join the organising committee. The next meeting will be held on 18 October in Kryvyi Rih.

We invite everyone to join in the work of the organizing committee (if you wish to join write to the email address: zpopovych@gmail.com ). Our immediate plans concern working on the programmatic documents and the statutes, as well as holding discussions about them in the capital and the regions.

Earlier it was decided not to participate in pre-term parliamentary elections since the current electoral system allows only the rich to win. However, we will hold campaign events, persuading citizens of the need for their own political force. Temporarily, until the completion of the registration process, we will use the resources of the Assembly for Social Revolution, including its site REV.ORG.UA  for informing people about our actions.

This initiative has been supported by the human rights activist Volodymyr Chemerys, the writer Artem Chapai, the initiator of the movement for the cancellation of the external debt of Ukraine, lawyer Anatoli Bashlovka, a researcher at the Centre for Social and Labour Studies Volodymyr Ishchenko, head of the NGO “Altera” Ihor Panyuta, culture and art critic Lisa Babenko and others.

The organising committee has been joined of the socialist union “Left Opposition”, “Assembly for Social revolution”, the movement “Against the Current” and other initiatives.