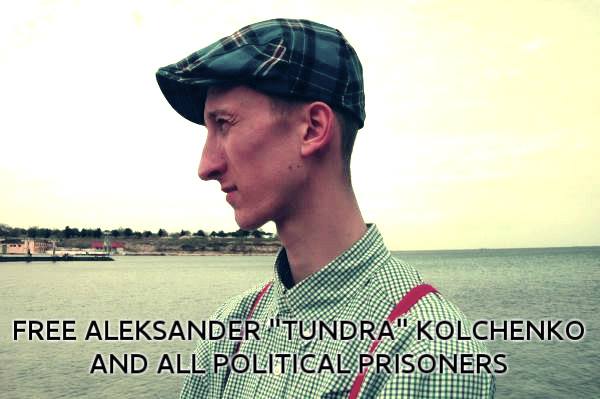 ‪Simferopol‬ ‪‎Aqmescit‬ in Crimea declined the legal request of political prisoner Aleksandr ‪‎Kolchenko‬ to recognize him as a ‪Ukrainian‬ national. Left-wing and antifascist activist Aleksandr ‪#‎Tundra‬ Kolchenko was arrested less than a month after the annexation of ‪#‎Crimea‬ and did not apply for changing his citizenship. Nevertheless, he is now considered a Russian citizen by Russian legal court against his will, because his registered place of residence is in Crimea. This is done so that he can be prosecuted within Russia according to Russian law. He is accused of preparing terrorist attacks and participating in the nationalist ‪#‎RightSector‬party, which is nonsense, since he is an ‪#‎antifa‬ militant. Now he is jailed in Moscow.

Another Crimean political prisoner Oleg ‪#‎Sentsov‬ got some additional charges according to a new criminal code article. Now he is accused not only of preparing terrorist attacks, but also of illegal purchase, giving, keeping or carrying weapons.

The Russian authority has started repressions against political and civil activists in the Crimea. 4 people were arrested by the Federal Security Service of the Russian Federation (FSB) and charged with participation in activities of Right Sector and preparation of terrorist attacks. Currently they are held in custody in Lefortovo Prison in Moscow. One of these arrested activist is Aleksander Kolchenko, 23 years old, known by the nickname of “Tundra”.

Tundra is a known Crimean political activist who has left-wing views. He actively participated in the anti-fascist movement. Among other activities, Kolchenko organized demonstrations in memory of a Russian civil attorney Stanislav Markelov, journalist Anastasia Baburova and antifascist Ivan Khutorskoy, who were killed by Russian Nazis in Moscow. Tundra also took part in protests against commercialization of education, against police brutality, against building up parks in Simferopol, and in many others.

Alexander was arrested in Simferopol on 16 May 2014, straight in the street. Seven people in civilian clothes pounced on him and put him on the ground with his face downwards, then took him to a building he never left after. On 24 May 2014, he was transported to Moscow under police guard.

“Sasha (Aleksandr) is a good, honest guy, very kind”, says Alexei Arunian, a Crimean journalist. “He used to read books on philosophy, take part in discussions. Excavated the acient settlement of Scythian Neapolis, played drums in a music band. As many others, he took part in protests against the annexation of the Crimea. Perhaps that is why he became a suspect.”

According to Kolchenko’s friends, he grew up in a poor laborers’ family, and, after graduating from university, worked as a loader in a postal company. Now his family is left without support.

Oleg Sentsov, a famous Ukrainian film director, is also among the arrested. Oleg is a laureate of numerous Ukrainian, Russain and Western movie prizes. He is a single father of 2 children. Oleg is also being held in custody in Moscow. The Ukrainian and Russian cinematographic communities have already said their word in support of Oleg Sentsov.